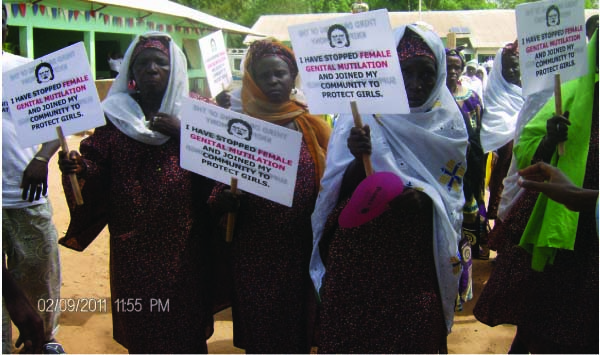 Twenty women circumcisers whose activities cover 150 communities in the Lower River Region (LRR) have stopped the practice of female genital mutilation (FGM), at the weekend.

At a public declaration, at Soma Lower Basic School in LRR, the circumcisers vowed to stop the practice of FGM completely.

The women, dressed in a special cloth, paraded and marched past the dignitaries along with some protected children, before dropping their cutting and  mutilation tools used in the practice, like knives and razor blades.

The landmark event was as a result of a three-year project in the Lower River Region in the campaign to eradicate FGM with constant support from ODAM, a Spanish NGO from Astruria.

The Gambia Committee on Traditional Practices Affecting the Health of Women and Children, GAMCOTRAP, in collaboration with the LLR communities, organised the public declaration, first of its kind in the region.

It was attended by women from different parts of the country, diplomats, development partners and local authorities.

In her remarks to welcome participants, on the occasion, Dr Isatou Touray, Exective Director of Gamcotrap, said: “GAMCOTRAP is a women’s rights NGO that promotes women’s social, political, economic and cultural rights with specific focus on sexual and reproductive health rights.”

Prominent among these is the campaign against harmful traditional practices affecting the health of women and children, especially the girl-child, she added.

“We are proud of the women and men of the Lower River Region, we cherish the leadership and great commitment of women leaders, mothers and circumcisers who made this happen,” said Dr Touray.

According to her, the efforts leading to the event were challenging, but satisfying because the communities have responded to the need for change.

Since the start of the project, the communities have been engaging in constant dialogue and consensus building through sensitization programmes.

She said that their partnership with ODAM ONGD has been based on mutual respect, honesty and professionalism and this has yielded the unprecedented result for both organizations in such a short time.

The eloquent women rights activist further revealed that ODAM has provided one hundred thousand dalasis to the twenty circumcisers in LRR, an alternative employment opportunity.

She thanked all their partners for their continued collaboration and support to the cause of women and girls in The Gambia.

Aja Dusu Jarju a renowned circumciser from Jarra Bureng speaking on behalf of the ex-circumcisers expressed their resolve in  joining the national crusade to eradicate FGM in the country.

Kebba Barrow, programme officer of the Association of NGOs in The Gambia (TANGO), salute Gamcotrap for their achievements.

“At the level of the Secretariat, we are aware of the support Gamcotrap and its board of Directors have given to those circumcisers who dropped the knife in 2009,” he said.

The Governor of LRR, Lamin Waa Juwara, applauded Gamcotrap for campaigning against FGM with respect and close collaboration with local authorities.

He salute the ex-circumcisers for the courage they have taken in abandoning a deep-rooted culture and urged them not to come back to it.

Governor Juwara commended President Yahya Jammeh for empowering Gambian women. He said that Dr Isatou Touray will forever be remembered in Gambian history for her immense contribution to the wellbeing of women and girls.

Madam Ndey Jorbateh from Norway said Dr Touray and her team are well educated and could have sought for international appointment where they would receive more pay but had decided to serve their country. “It is a move that deserves acknowledgement and support,” she said.

Madam Fatou Kinteh of UNFPA showered praises on Gamcotrap for their hard work and said their partnership dated back 20 years ago. She denounced the practice of FGM/C.  “Dropping a knife by a circumciser is not easy and takes a lot of hard work,” she said. 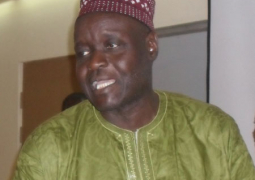