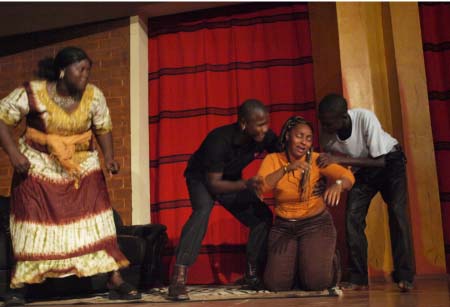 As part of taking the movie industry in The Gambia to higher heights, eighteen people recently completed a week-long training on movie performance at New Life Children s Centre in Kanifing, organised by Pan-African Theatre Production.

Speaking in an interview with The Point Entertainment and Lifestyle columnist at the closing ceremony of the workshop, Aishatu Jallow, CEO of Pan-African Theatre Production, thanked the organizers of the workshop as well as the participants for making the training a success.

She said the objective of organizing the training was to help the participants to learn more and improve their skills in movie performance, adding that some of them have been acting movies over the years but they lacked the basic knowledge of it.

Aishatu added that since 2005, she has been in the business of acting, something she says she loves doing and passionate about.

“I am still acting and I came out with a stage performance called ‘Respect Africa’,” she says. “My first movie in The Gambia is ‘Living in Love’ and my first stage performance was done in ‘Love Battle for Supremacy’.”

She commended the participants for the hard work, adding that they were able to gain more experience during the workshop.

Aishatu says that in additional to all the merits of acting, it improves someone’s oral English, for instance, and is another way to create youth employment.

“My intention in the future is to improve the movie industry in The Gambia and Africa as a whole,” the young determined actress said. “I am ready to go for international competition because I know I can do it. This is my first workshop organised and I am hoping to organize more workshops in the future.”

CEO Aisha said the Pan-African Production was launched on 28 December 2013 at the Ebunjan Theatre.

She calls on the youth and potential artists to come together so they would take The Gambia’s movie industry to the next level.

She also calls on the National Centre for Arts and Culture to give a deeper look into the copyright issue in the country.