However, Musa Suso was acquitted and discharged on one of the four counts (count three) on the ground that "the evidences adduced were compelling and shaking as the prosecution did not prove that the six alleged deaths mentioned in court were not the result of other means as no postmortem certificate is tendered to prove otherwise."

In his ruling, Magistrate Kayode noted that the prosecution had failed to controvert the defence's evidence that, the six deaths: Modou Sano, Njaba Sillah, Mo Manneh, Halifa Baldeh, Malang Sanneh and Ebrima Sanneh were not inmate as at that time of eating the dead bull, and that they also failed to prove that the six are alive.

According to the particulars of offence, on count one, the accused Musa Suso was convicted for giving false information to the then Inspector- General of Police and then Crime Management Coordinator, Burama Dibba that one Ebou Kah was supplying David Colley, Prison Director fuel through the influence of Musa Suso.

In count two, Musa Suso was convicted on the charges that the mother of Batch Faye gave two satellite discs to be used at Mile Two, but instead it was alleged that David Colley had diverted it into his personal use.

Musa Suso was also convicted to have given false information that he used his influence to paint a prison truck at one Sidia Jatta's workshop.

Following testimonies of Sidia Jatta that the painting was paid by the Ministry, Magistrate Kayode ruled that by Section 144 of the Evidence Act, the prosecution had discharged the burden to prove the charge, noting that the accused was found guilty on that count.

Despite the emotional mitigation made by the defence for the court to temper justice with mercy, the convict was handed a maximum sentence by Magistrate Kayode, ruling that the rate of giving false information to public officers is on the increase.

He elucidated that it is the responsibility of the courts to prevent society from such social-ills as it impedes development. 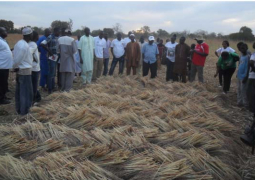 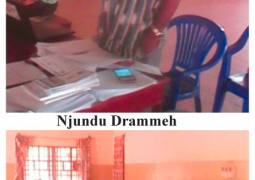