Seventeen security personnel from the Gambia Maritime Administration, the Gambia Ports Authority, the Gambia Civil Aviation Authority and the Gambia Navy were awarded with certificates at a colourful ceremony held at the Atlantic Hotel on Thursday.

They received the certificates for participating in a one-week intensive training on the operation of the equipment donated to The Gambia through the Gambia Maritime Administration.

Speaking at the presentation ceremony, the director general of Gambia Maritime Administration told the gathering that the training was one of a series that would be conducted regularly to enhance the capacity as well as the service delivery of all stakeholders in the maritime industry.

“The as you all know is not well resourced as far as Maritime Administration is concerned in some areas,” DG Aki Bayoh said. “However, we are lucky to have one of the most beautiful waterways in Africa and also fortunate to have the . These are very mighty and rich resources.”

He added: “I believe that if we are able to put most of the requirements that are needed in connection with search and rescue, be it safety at sea and so on, then The Gambia will be one of the countries to be envied in the world as far as the maritime industry is concerned.”

Mr Bayoh also used the occasion to thank the course consultant for successfully conducting the training, “which will have an impact on the security personnel”.

Other speakers on the occasion included the IMO consultant on SAR and GMDSS, Vladimir Spiridonov, and Chief Naval Commando Madani Senghore, who gave the vote of thanks on behalf of the security personnel. 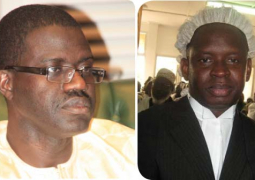