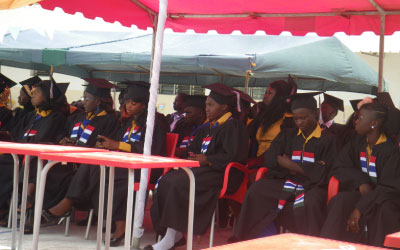 SCANAID Senior Secondary School Saturday graduated 146 students who completed their Grade 12 examination, at a ceremony held at the school grounds in Brufut.

Speaking at the ceremony, Mariama Baldeh, principal of the school, said this year was the tenth year of their school’s existence.

The journey of life and existence is full of huddles, but they bravely marched and conquered the challenges and obstacles, and they were able to now graduate 146 students.

She said the 2014 results were very encouraging, and five of their students came out with flying colours and are now at the UTG doing various fields of study.

She said their best students succeeded in all nine subjects, with good results ranging from A1 to B.

Ms Baldeh said the school has electricity, internet connection, telephone cables, and other facilities and the staff and students enjoy the facilities.

Among their constraints is the dumping of gabbage on the road leading to the school, which is their major headache.

To the graduates, she said everything in life must surely come to an end, and that the end justifies the means.

“Today you are stepping out to the world to thread on the good path or the bad path. Your parents have played their role in exposing you to be educated. It is now your turn to complete the journey to prove yourself as worthy and respectable citizens,” she said.

Delivering his speech on the “awareness of environmental protection along the Gambian coast” Lamin Jobateh, executive director WABSA, who was also the guest-speaker, said the coastal area is the settlements from Banjul to Kartong along the coast and it stretches 81 kilometers.

The environment is the land, water and air around them and that awareness is the act of raising someone’s knowledge on a particular subject.

This was important, because the coast-line of The Gambia provides a habitat for one-third of the population of the Gambia, and there are a lot of socio-economic activities taking place along the coastal areas.

Jobarteh said some of the effects of littering on coastal and marine life, as well as to the people living on the coastal zone includes the fact that a lot of marine animals, mammals and sea birds die every year after ingesting or being entangled with plastic marine litters.

Plastic bags travelled and float easily in the air and water, and they are clogging water ways, sewage pipes and gutters which could result in breeding grounds for mosquitoes and could cause epidemics.

He said used batteries, once they burst, could easily be carried away by run-off water which could either pollute the river, ocean creeks or contribute to under-ground water contamination which could also have adverse effects on human health.

Ousman Manneh, the PTA chairman, congratulated the principal and her staff for the tremendous work they are doing throughout the academic year. 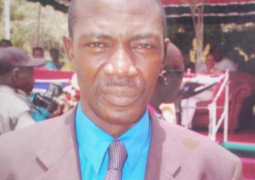