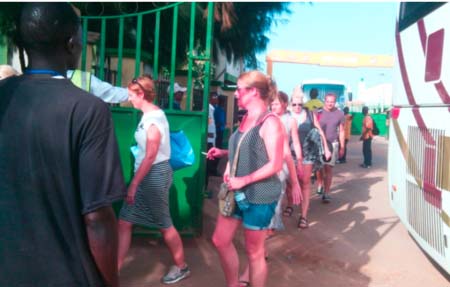 As the new tourist season approaches, 120 representatives of travel agencies in the Netherlands have arrived in The Gambia to explore the country’s tourism, and to help sell Gambia’s products to other destinations.

They arrived through Barra from Dakar, Senegal, and were received on arrival at the Barra ferry terminal by officials of The Gambia Tourism Board, GT Board.

Speaking to journalists shortly after their arrival, Abdoulie Hydara, director-general of the GTBoard, said the success of any destination rests on the support and collaboration of the travel agencies, which is a very critical component of the tourism value chain “because these agents are the people who interface directly with the consumers who intend to travel to any destination”.

He said the 120 travel agents coming to the destination at the beginning of the season was a great achievement for the tourism sector and the country.

Tourists only go to places that are safe like The Gambia, and The Gambia is second to none in terms of safety, he added.

The GT Board CEO thanked the Gambian leader and his government for providing the enabling environment for more tourists to come to the country.

He also thanked the Tourism Minister for his efforts at promoting tourism in the country.

Also speaking was Adama Njie, director of Marketing at the GT Board, who said this was the first batch of more than a hundred travel agencies from the Netherlands, who have visited The Gambia this time around to explore what the country has to offer.

Travel agencies are always among the first to inform people to visit to The Gambia as a destination, which is why “their coming here is very important”.

“They would know what The Gambia could offer as the Smiling Coast of Africa, and when they go back they would be able to sell the destination,” Mr Njie added.

The GTB director of marketing further said having more than hundred travel agency representatives to visit The Gambia “tells a lot, and this is actually under the umbrella of Tui and Tui, who are now bringing more flights compared to last year.

“We have now penetrated the Russian market, Czech Republic, as well as the United States to bring more tourists to the destination.

“We have diverse people coming from different countries, but the core of the activities is the Dutch and, for the first time in The Gambia, we have the Tui flight,” he added.

Kalle Manneh, an official of The Gambia Tours, also told journalists that “this is the marketing team from the Netherlands”, adding that Tui Holland is a “very big travel agency”.

“We have just come from Senegal, and now we are in Barra to show them that our country is the Smiling Coast of Africa,” he said, adding:  “They are on a short visit, and they can sell The Gambia as a destination.”