103 Deportees Sent Back to Spain

At least 103 people considered to be illegal immigrants were on Friday 19th September 2008 repatriated from Spain, but were sent back to Spain, as the Gambian authorities refused to issue clearance for them to disembark from the plane.

The plane spent several hours at the , but returned with the deportees to .

According to diplomatic sources, the Gambian authorities' refused the give the clear because they were not notified on time.

The Gambian authorities were supposed to have been notified earlier to enable them to prepare the ground to facilitate the disembarkation exercise.

Upon arrival, there should a medical examination, and security scrutiny on those repatriated besides providing accommodation for those from upcountry for a day or two.

They were repatriated under the framework agreement between and The Gambia. 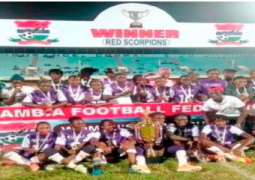