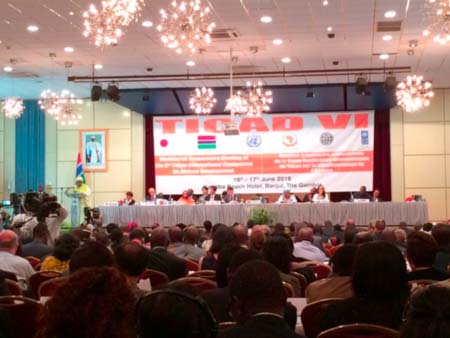 Masakazu Hamachi, Parliamentary Vice-Minister for Foreign Affairs of Japan, has said more than 100 Japanese companies are expected to participate in TICAD VI.

It is believed that their insights and technologies would be of great value to deepen the discussions on the priority areas of TICAD VI such as industrialization, health, and social stability.

“The government of Japan has regularly held dialogues with civil society, and it is my pleasure to have the attendance by the representative of the civil society being an open forum to mobilize resources from the public and private sector, which has been the traditional virtue of TICAD since its launch in 1993.”

Vice Minister Hamachi disclosed further that TICAD VI will open a new chapter in the history of Japan and Africa.

On behalf of the government of Japan, he said he would like to renew Japan’s resolution to exert its utmost effort to the successful holding of TICAD VI through a close cooperation of public-private partnership.

Ms Louise Cord, World Bank Country Director for Senegal and West Africa, joined the organisers of the meeting in thanking the Gambia government for the hospitality shown to them since their arrival in the country.

The World Bank is pleased to be co-organizers of the TICAD meeting, and believes that the TICAD process had played an important role in discussing African development over the years, she said.

“It has steadfastly promoted the concepts of ownerships and partnerships as we can see today,” she said, adding that it had consistently advocated support for the development priorities put forward for the continent.

According to her, the meeting is a unique opportunity to develop the agenda for TICAD VI and to ensure that sessions focus on key challenges and opportunities.

In response, governments need to accelerate structural reforms to achieve higher growth, she said, adding that economic transformation is necessary not only for growth, but employment and economic opportunities for young people particularly.

Mrs Fatima Acyl, commissioner at the African Union Commission for Trade and Industry, said the AU Commission would like to commend the government and the people of Japan, as well as all the co-organizers for their efforts at supporting the development processes of the African continent.

According to her, 23 years after the launch of TICAD process in 1993, they were in Banjul not only to acknowledge the consistency and effectiveness of the programmes and action implemented on the TICAD, but also to shape the new directions for the coming years.

Maged Abdelaziz, UN Under-Secretary General and Special Adviser on Africa, said the TICAD VI is a major event being held on the African soil. It was not only historic in terms of venue, but would also be organised at an opportune moment in order to promote African Agenda 2063.

Neneh Macdouall Gaye, Gambia’s Minister of Foreign Affairs, said the meeting is expected to deliberate upon the draft Nairobi Declaration, which is designed to be built on three major pillars namely, economic transformation and diversification and industrialization, building of resilient health systems in Africa, and social stability.

Over the course of the TICAD VI preparatory ministerial meeting they shall thoroughly discuss and enrich the draft Nairobi documents, including a strategy document which would outline concrete actions for the implementation of the expected outcomes, she added.