Mr. Mendy said this while addressing a gathering during the signing ceremony between The Gambia Wrestling Association (GWA), National Center for Arts and Culture (NCAC) and Gambia Association of Local Government Authorities (GALGA) for the promotion of traditional wrestling as cultural heritage with the creation of a network of wrestling training clubs and use wrestling as a tool to create solidarity amongst communities.

The ceremony which was held in Mansakonko in the Lower River Region was graced by wrestling stakeholders and club managers amongst others.

According to him, the surest way of ensuring young people don’t risk their live in the high-sea is to invest in sports, noting that hardly will there be any business or employment that will pay someone more than what Lionel Messi and Cristiano Ronal is paid.

“We have our own footballers and athletes who are paid and even their one-week wage is more than some senior people's one year salary and yet we think sport is not important.”

He further revealed that some of the wrestlers and athletes are paid within and above D100,000 within hours, noting that some people cannot earn such an amount in a year and yet people think sport is not important.

“It is a wrong notion that most of the time we talk about sports and we think it is a joke or is for the drop-outs or even for those without good brains.”

Marcel who was representing government at the programme, expressed their desire as Ministry of Youth and Sports and National Sports Council to be associated with this project, adding that the project was part of their plans and have been their desire over the years.

“We have some sports infrastructure but we are of the opinion that we need more of them so that no sport will be affected. The advent of this project will help us a long way in achieving lofty ideals of ours,” he said.

He added that wrestling is one of the most important sports one can ever be involved in, because of its cultural and traditional component. 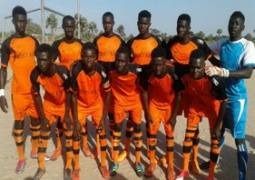