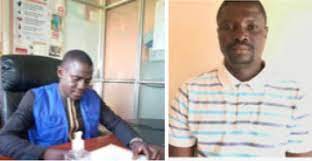 I was together with journalist Pa Modou Faal a day before he died in that tragic car accident which also claimed the lives of journalist Musa Ndow and public health worker Kawsu Bayo.

As usual, the Department of Information Services (DoIS), normally organizes end-of-year party for its staff both in-house and those deployed at the various ministries.

This year’s staff party was held on Saturday, 15th January, 2022.  Pa Modou who also attended the party was smartly dressed, looking good and interacting with colleagues; not knowing that would be our last inter-personal contact with him.

At the party, Pa Modou and I talked about our families and the success stories, challenges and the way forward in our profession as Information Officers at our various duty posts.

At some point, we shifted the topic by reflecting on the days of together in the media under Yahya Jammeh’s dictatorship when journalism was a risky area to venture into. Pa was a braved journalist who stood his grounds despite the odds. He loved journalism.

We were at the party till after 8pm GMT and left the venue together in Modou Kanteh’s car. We drove all the way from the Ocean Villa Heights in Brufut through the slow traffic up to the Coastal Road Junction where Pa Modou and Samsideen Ceesay, Information Officer from the Ministry of Trade, alighted and boarded a taxi to connect to the Wellingara- Tabokoto where Pa Modou used to live.

While in the slow traffic, Pa Modou was constantly in touch with his family in the house assuring them that he was coming but caught in the traffic. That was a clear testimony of his love and care for his family. He also cared about other’s families. I remember him always calling me “Na Dinding” (my junior) and asking: “how madam and Njieyo (meaning my daughter) are doing?”

Modou Kanteh and I proceeded to the main airport junction before heading towards the popular Lamin NTC where I alighted.

Pa Modou was always ready to learn. Currently, we are doing a 15 month long training course organized by the International Organization for Migration.  “Na Dinding, as he fondly called me when this course ends in June, I think we should be awarded a degree or a diploma. This is a very good course” he told me.

Pa respected everybody and was a pious Muslim who prayed frequently. In fact, anytime you meet up with Pa Modou the first thing you will see is his beautiful white teeth while stretching out his hands to greet you.

To his wife, Mariama: am saying take heart and May Allah gave you the fortitude to be able to bear this irreplaceable lost. Pa Modou Faal will be greatly missed.

For Musa Ndow, I missed him for a while now.  The last time I saw him was around Serrekunda /Brikama Highway.  We quickly exchanged pleasantries and he left.  This was around October-November 2021 if my memory serves me well.

Musa Ndow was a good man and a pious Muslim; always smiling and jovial.

I could remembered in 2007, when I was doing my first daughter’s naming ceremony in Tallinding, Musa Ndow was among those who attended the event. From that moment up to now, our relationship became stronger with mutual respect for each other. He always called me Njie whenever we meet.

I pray that God, the Almighty forgive him for his short comings and grant his beautiful soul a place in Janatul Firwadsi. 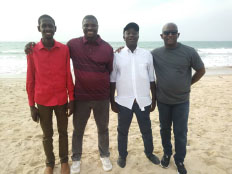 Late Pa Modou Faal, standing second (left) at the beach with colleague Information Officers a day before he died