On 15 May, Palestinians commemorated the Nakba, or “catastrophe” - the ethnic cleansing of Palestine in 1948 to make way for the creation of the state of Israel.

Israel’s creationentailed the forced expulsion of at least 750 000 Palestinians; the destruction of over 500 villages and cities; and the murder of about 15 000 Palestinians in a series of mass atrocities, including more than 70 massacres.

But it’s difficult to look back when one can barely keep up with Israel’s fresh crimes against the Palestinian people. The Nakba ever ended. Its latest manifestation is the recent murder of Palestinian journalist, Shireen Abu Akleh.

Israeli military spokesperson, Ran Kochav, even suggested that Abu Akleh was at fault for doing her job! Kochav justified Abu Akleh’s murder by claiming that she was working amidst armed Palestinians and that she was “armed with cameras.”The Israeli government even released a video to support this. Within hours, the bogus footage was debunked. Eyewitnesses - including other journalists reporting on the raid – confirmed that Abu Akleh was not killed by Palestinians.  Israel was forced to walk back its “the Palestinians did it” defence.

Back in 1948, Israeli authorities – in an effort to conceal its terror campaign – claimed that Palestinians had sold their land willingly or they fled their homes and villages because Arab leaders had encouraged them to do so. The Israeli government has been gaslighting Palestinians for 74 years.

Abu Akleh’s death is also a bloody reminder of the deadly system in which Israel has locked Palestinians for 74 years.

It is the impunity granted to Israel by world powers for its initial war-crime (the Nakba in 1948) that has paved the way for Israeli settler-colonialism and apartheid to systematically devalue Palestinian lives – whether Shireen Abu Akleh; or the lives of thousands of Palestinians under imminent threat of ethnic cleansing right now in Sheikh Jarrah or Masafer Yatta; or the 240 Palestinians killed in the Gaza Strip one year ago this month; or the 750 000 Palestinians depopulated by Israel 74 years ago.

Israel was admitted to the United Nations on 11 May 1949 on three conditions. The first was that the status of Jerusalem would not be tampered with. Palestinians would also be allowed to return to their homes. Israel was to respect the borders established by the UN Partition Plan of 1947.

These, and other UN conditions and resolutions, have never been met. For almost eight decades, there has been no concerted effort by the world’s powers to force Israel to meets its international legal obligations.

This inaction contrasts sharply with global reaction to Russia’s invasion of Ukraine.

Leaders, whose countries’ foreign policies have for decades justified  - and even sponsored - Israel's brutal occupation and annexation in Palestine now talk about the urgent need for international law to be upheld in Ukraine, and for a belligerent state like Russia to be held to account.

Palestinians are amongst the first to agree.

In the rubble of Mariupol, they seeDeirYassin village. When Palestinians see Ukrainian refugees crossing into Poland, Hungary and Moldova, they think of how they fled to Jordan, Lebanon and Syria. In Gaza, Palestinians still navigate the rubble from - not just one - but at least five major Israeli bombardments. The lame excuses now trotted out in official Russian propaganda to justify the bombing of civilian targets in Ukraine are all too familiar to Palestinians.

Palestinians are also looking with interest at the speed in which comprehensive sanctions have been imposed on Russia to force it to comply with international law and withdraw from Ukraine.

Since 2005, Palestinians have been asking for a similar course of action against Israel. Any talk of sanctions on Israel has – not only been rejected by the world’s superpowers – but criminalized in some cases.

Israel has occupied the West Bank including East Jerusalem, the Gaza Strip and the Golan Heights for almost 55 years. Just as Russia has been accused of the war crime of transferring citizens into occupied Crimea, Israel has transferred more than 650,000 of its citizens into occupied territory. Russia and Israel have also transferred Ukrainians and Palestinians, respectively, out of occupied territory - also a violation of the Fourth Geneva Convention.

Within weeks of Russia’s invasion of Ukraine, major international companies shut up shop in Russia – but still trade in Israel, and many operate in its illegal settlements.

Israel has been asked to investigate Abu Akleh’s killing.For 74 years, the world has expected Israel to investigate itself and self-correct. It has not done so. It is time to rescind Israel’s get out of jail free card. There must be international accountability for the Israeli apartheid regime.

Suraya Dadoo is a South African writer. Find her on Twitter: @Suraya_Dadoo. This piece originally appeared in IOL (South Africa). 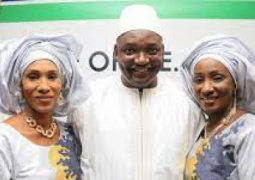 Open Letter to Mr. President President Barrow’s Makeover Government 2.0. What it should look like