Dear Brothers and Sisters this year we again Mark yet another mile stone in celebrating  the day when workers fought and died in pursuance of their rights.

We pay tribute to those who died in the process as we continue on their legacy for fighting for the rights of the workers for better living condition, decent work and social cohesion.

It's one year today when the Covid19 Pandemic hit the world and like other Countries The Gambia was not spared. We all witness increases in positive cases and the head for Government in collaboration with the workers and Employers in addressing the human dimension of the crisis for the simple reason that the informal sector, Young people, Women, Pensioners and migrant workers are all devastated consequent to this muster Virus

The pandemic which has not only decimated jobs and put the livelihood of workers families as breadwinners loose their Jobs. The Pandemic has brought about Boarder closures, lock down and confinement restricting preventing agricultural workers from accessing the markets to sell their harvested produce. For others especially the informal workers who are most vulnerable are unable to earn income and to feed their families. No income, means no food or at best less food and less nutritious food.

In The Gambia many have lost their Jobs including  in the Tourism as Hotels closures became the order of the day. Trade has declined and so the movement of goods have reduced drastically affecting the transport sub Sector. The informal economy which plays a very import role in the economic development of the Country suffered as a result of this muster ours pandemic. In general the COVID 19 pandemic has affected every worker as prices of essential commodities high rocketed unchecked by the Authorities.

COVID 19 pandemic has brought about lots of challenges to our Government and theirs is a need for the Gambia Government to develop long term sustainable strategies to address these challenges in order to tackle poverty create better jobs in the rural economy and formalise the informal economy.

As workers organisation representing different Trade Unions GamTUB will continue to protect the interest of its members while working closely with Government of on all Industrial Relation issues. As stakeholder in the International Labour Organisation ( ILO) we have along with International Organisations and Government been taking part in all their Virtual Forum organised by ILO . On the invitation of the Governing Body of the ILO some of our members have have completed and awarded Certificates on lines Coursers organised by the ILO /ITC Training Centre in Turin Italy viz:

We look forward to in person training Programmes with the ILO during the Course of this year to include:

- Workshop   ILO convention with particular reference to ratification of C190

We conclude by congratulating the GOVERNMENT, Employers and Labour Unions on the occasion of the 2021 International Labour Day commonly known as Workers Day.

Like other occasion on this day we in the workers Movement wish to call on the Gambia Government through the Honourable Minister of Trade, Regional Integration and Employment to

Long live the Republic of The Gambia. 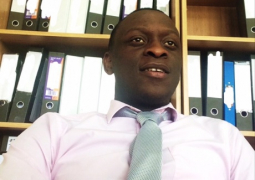