Although Jammeh initially accepted Barrow’s victory, he reneged a few days later. Thus, Jammeh plunged the country, which has long been a beacon of peace in the sub-region into an 44-day long impasse that filled Gambians with fear and trepidation. Jammeh finally left The Gambia and went into exile in Equatorial Guinea on January 21, 2017, following protracted negotiations and threats of the use of force against him by ECOWAS.

Barrow’s surprise victory over Jammeh was mainly because of a Coalition of seven opposition parties and civil society formed in October 2016. Barrow, who was then the leader of the UDP, because its leader Darboe, had been jailed by President Jammeh, resigned from the party to enable him contest the presidential elections as a Coalition candidate. Barrow was sworn into office twice: first on the constitutionally-mandated date of January 19, 2017 in Dakar, Senegal, where he took refuge during the impasse with former President Jammeh, and again on February 18, 2017 in The Gambia.

Instead, President Barrow decided to serve his five year-term in office, provoking protests, which resulted in three deaths in January 2020. President Barrow was also widely criticized for his selective implementation of the recommendations of the Janneh Commission which investigated the financial dealings of former President Jammeh, his failure to ensure adoption of the new Draft Constitution of The Gambia, and for corruption under his watch.

Despite these criticisms, President Barrow, formed the National People’s Party (NPP) in late 2019 to contest the December 2021 presidential elections, after falling out with the UDP Party Leader Darboe, who he often referred to has his political “father.” President Barrow also formed an alliance with a faction of former President Jammeh’s party, the Alliance for Patriotic Reorientation and Construction (APRC) to help him contest the December 2021 presidential elections. This alliance was condemned by many given the dirty and gruesome record of former President Jammeh’s rule.

President Barrow nevertheless had a huge victory in last week’s presidential elections, with 53 percent of votes, compared to the runner up, Darboe who had 28 percent of votes; just over half of Barrow’s votes. The remaining four candidates, together, had less than 20 percent of the votes cast.

The polling and official results have been endorsed by local and international observers, including the African Union, ECOWAS, the EU and the Commonwealth. A day after the elections, three opposition leaders, including Darboe, announced that they would not accept the results, citing “inordinate” delays in their release and issues raised by their representatives at polling stations. However, one of them, the Independent candidate Essa Mbye Faal congratulated President Barrow a day later on his victory, as did the National Unity Party (NUP) candidate, Aboulie Ebrima Jammeh.

Although some UDP supporters protested the official results, it is noteworthy that the UDP leader, Darboe, called for calm. Fortunately, the protests ended as quickly as they started, and the entire country is now calm. As such, the 2021 presidential elections which were vigorously contested have come to an end without any unrest or major disruptions in the lives of Gambians.

The 2021 presidential elections provide valuable lessons which other African countries, indeed other developing countries around the world, can learn from. First, the legendary voting system in which voters drop marbles into drums, with one drum per candidate at each polling station has again proved to be highly effective. This is especially so The Gambia which has a high illiteracy rate which practically precludes the use of paper ballots.

The 2021 presidential elections in The Gambia also showed that the Independent Electoral Commission (IEC) should be strengthened, and that it should effectively communicate with the public to, for example, address outbreaks of fake news on social media. In the lead up to the elections, there were many stories which dented the IEC’s reputation, and reduced confidence both in its impartiality and ability to conduct the elections.

Electoral laws should be reviewed and strengthened to curb bribery of voters to secure their votes. In this vein, serious consideration should be given to public funding for eligible candidates, limiting their expenses to public funds provided, and introducing serious penalties for bribing voters or accepting bribes from politicians. In addition, the president vacate office three months before the elections which will be overseen by a non-partisan caretaker administration to reduce the impact of incumbency and his or her use of public resources to campaign.

The recently-concluded Gambian presidential elections have proved once again, that this, the smallest country in mainland Africa with a population of only 2.1 million people, and which bills itself as The Smiling Coast of West Africa, can teach other African countries by serving as a beacon of democracy by holding peaceful, free, fair and transparent elections. How nice! 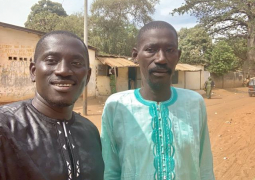