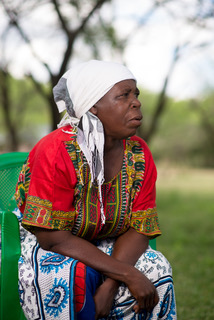 “If an older woman has red eyes she would be expected to be a witch. I was afraid that it might happen to me."  This quote from an older woman in Tanzania has been repeated by many an older person in Gambaga in northern  Ghana, Kilifi and Kisii in Kenya, and in many other villages across Africa.

Once you are identified as a witch, literally anything can happen to you – including your disappearance or even your unexplained death. In some African countries, there are even specially designated “witches villages” set up by the Government for those suspected of being witches. This sounds like a terribly inhumane public policy until you realize that these are not gulags or prison camps: ironically, these villages are quite simply the only safe space for women once they are labelled by the community as witches.

While there are no “witches villages” in The Gambia, under the Jammeh regime we all saw how easy it was for older persons to be victimized and socially ostracized once they were accused of being witches.

A few weeks ago on June 15th, as the COVID-19 global pandemic continues to rage with far-reaching social, economic and health consequences for older persons, the world marked the 16th anniversary of the World Elder Abuse Awareness Day (WEAAD). This year’s theme was ‘Access to Justice’; and it was a timely call to action, to prevent and address injustice against older persons.

Even before the COVID-19 pandemic, the World Health Organization (WHO)estimated that globally, 1 in 6 older persons – defined as people above the age of 60 - was subjected to elder abuse. With the onset of the pandemic, and with families and communities deprived of income opportunities, older people have been exposed to financial abuse. And in these pandemic times, cases abound of  physical and sexual violence perpetrated against older persons who are isolated from their families.

Examples of such abuse of older people include financial abuse like the case of a 97 year old woman from western Kenya, AderoOuna, who expected to receive a sum of Ksh8000as her social pension support. She only got Ksh7,000 -- because her son took Ksh1,000 for himself, claiming it as his “facilitation fee”.

In The Gambia there are similar examples of family members behaving in the same way when they are sent to collect money on behalf of an older relative who maybe suffering from mobility issues.

We hear more and more stories of young men threatening their parents with violence and forcing them to sell their property to pay for the son’s “backway” fare to Europe.

Others in the rural farming areas simply wait for their parents to get paid in cash for their produce during the trading season, and then just steal it from wherever in the house the money is kept.

And of course it’s not always just about money: in many family situations, grandchildren are allowed (sometimes even encouraged) to engage in a cruel game of taunting and teasing their ‘mam’, often with the tacit approval of the other adults in the compound.

A few years ago Ageing with a Smile (Gambia)-- a small voluntary community-based organization --uncovered a particularly poignant example of gross neglect, where an older woman who was over 100 years old was confined to living in the outhouse in terribly inhumane conditions when she was the actual owner of the compound.

All these actions constitute elder abuse. Elder abuse is a public health and social issue that permeates all societies– including African societies where we have always believed that we revere and respect older persons. Shockingly, it is often perpetrated by those who are closest to older people, such as family members and caregivers, and by those who work in social and state institutions that actually owe a duty of care to older persons.

Meanwhile, for older persons, the inability to defend themselves and the lack of information on how to access help in cases of elder abuse, continue to be major barriers to accessing justice. And for third parties who are trying to do the right thing, spotting and challenging abuse is not always easy.

As we consider all these facts and observations in the wake of World Elder Abuse Awareness Day (WEAAD), it is critical that we activate awareness, and the reporting and prosecution of elder abuse with the same vigour with which we prosecute other violations of human rights. Access  to justice  is not just a human right: in some instances it may be the only effective way of protecting the individual. And access to justice in addressing elder abuse is everyone’s business.

In broad terms there are three main areas in which we must respond to the WEAAD call to action in the Gambia:

Firstly, we must get our government to ratify the AU Protocol  on the Rights of Older Persons in Africa as it provides significant avenues for advancing access to justice for older persons. And on a related note, we must also make sure that the rights of older persons are specifically and sufficiently protected in the new Constitution.

And finally, at the level of the citizenry, at our level, you and I must ensure that in our every day lives, we make a conscious effort to look out for our older citizens …to be more aware of their situation …and to be more intentional about protecting them from predators and abusers, particularly when it involves those who are closest to them. It is high time that we debunk the myth that elder abuse does not exist in Africa and face up to the painful and uncomfortable reality that it is as alive and well in The Gambia as it is in several countries across Africa.

So if you see something, say something. It is the only way we can keep our older persons from being abused and taken advantage of because more often than not they do not have the voice to advocate for themselves – whether they are rural farmers, or pensioners, or taunted grandparents, or so-called “witches”.

After all, we owe it to our parents, to our grandparents, and indeed to our future older selves, to make The Gambia a kinder, friendlier, and more inclusive place for older persons so that they too are never left behind.

Adapted by Sola Mahoney and Balla Musa Joof (ASI Gambia) …from an article previously published in the Daily Nation of Kenya, with permission from the original authors

Tribute to a Friend – Momodou Ceesay