Sanna Danso, an agriculturalist has said that there is need for sustainable agriculture to meet the increasing demand for food for the growing population. 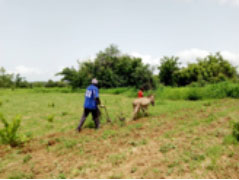 He added that for the Gambia to ensure food security, we need to understand the climatic changes around us and how it affects agricultural productivity and rural livelihood.

Mr. Danso made these remarks during an interview with this reporter recently.

He said climate change and global warming are current global problems facing many countries, adding that emission of green house gases is responsible for global warming and subsequent climate variability.

“The emission of greenhouse gases from gas flaring, open burning, vehicle emissions, deforestation, and use of solid fossil fuel for cooking are some of the causes of climate change in The Gambia,” he stated.

Mr. Danso added that Gambia is still practicing rain fed agriculture which renders her vulnerable to the adverse effects of climate change, extreme climatic events such as flooding, extreme heat, and drought which lead to soil degradation and low crop yields.

According to him, decline in agricultural productivity discourages farmers and may lead to change in livelihood especially in rural settings.

He said this could also lead to migration from rural to urban regions thereby affecting development of rural regions in the country.

He mentioned that non-availability of seeds, fertiliser and irrigation are other reasons for delayed sowing of crops and plant density.

He said declines in yields result in a relative reduction in spending power by households which might otherwise have used cash from the sale of produce to buy basic items like soap and paraffin and to hire occasional labour, or to purchase inputs such as seed and fertiliser as well as agricultural implements. 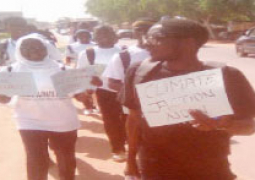 Young Volunteers for the Environment (YVE), a youth-led environmental organisation on Saturday 6 October 2021 observed the Declaration of Youth and Climate Action.