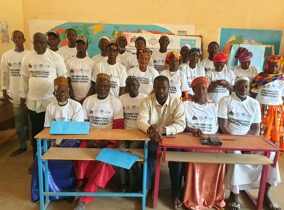 The theme for these training sessions was: "Inclusive participation: Building Local Capacities for Sustainable Grassroots Development.”

However, the trainings were centered on NCCE’s mandate in advancing civic education, awareness and citizen engagement in community development initiatives among citizen, understanding the Local Government Act and Decentralise Policy, importance of inclusive community participation in decision making and Local Governance & Grassroots Development, civic rights and duties of a citizen per 1997 Constitution of The Gambia and patriotic and responsible citizenship.

It is also aimed at promoting civic awareness among decentralised structures especially youth, women and Persons With Disabilities for their increased inclusion and participation in decision-making and sustainable grassroots development.

Speaking at the closing ceremony held at Kiang Keneba in Lower River Region, Ansumana Ceesay Senior Program Officer of NCCE, reminded that inclusive participation and consultation is vital in ensuring sustainability development and shared prosperity while ensuring rights of all individuals are respected.

The training, he added, could not have come at a better time, considering the polarisation in the country mainly due to misinformation and hostile political climate amidst post presidential and parliamentary elections.

Ceesay reiterated that despite continued efforts to increase inclusion and participation through policy and legal frameworks, there still exists gaps in active involvement of citizens in decision making, especially at the grassroots, hence the intervention by NCCE and partners such as UNICEF and the Peacebuilding Fund to increase civic education especially among the decentralised structures at the grassroots.

Ceesay pointed out that, without extensive and active civic engagement especially women, youth and Persons with Disabilities on their views and needs, policy-making and development processes will not be holistic and hence will fail to serve the common good.

Reacting to NCCE’s interventions, participants in almost all the training venues expressed appreciation to NCCE for what they called ‘timely engagements’ and provision of the much-needed information that are very useful in raising civic consciousness.

This, he added, would also ensure inclusive participation and sustainable grassroots development.

The training was organized by NCCE and funded by UNICEF under the UN Peace Building Fund.

The Food Safety and Quality Authority (FSQA) recently held a debate session on whether The Gambia should cease the importation of poultry products to source such products from local Gambian producers.

After announcing the reopening of schools, which shall be in two folds in the country, the minister of Basic and Secondary Education (MoBSE) has reiterated that “education is everybody’s business.”