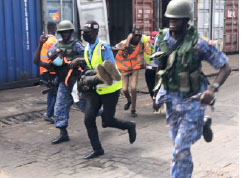 The activity is part of requirement for International Ship and Port Facility Security (ISPS) code. The code is a set of comprehensive measures developed in response to September 11 terrorists attack on United States.

After the attack, there was increased international maritime traffic; so the international community deemed it necessary to have a global response in place dubbed-ISPS.

The port facility maritime security exercise was performed as stimulus (not real in nature) to know how quick port officials and the state security agents can respond to similar emergency in the sea port.

Earlier on, the exercise started with a stimulus fire breakout from the GPA building unnoticed and the Navy rushed to the building with their equipment to evacuate the staff, to save lives from the incident.

Minutes after the arrival of Navy, fire fighters also arrived at the unpleasant incident to help in putting off the fire and also to save lives and properties.

During the inferno, it was discovered that many casualities was registered because many fainted and others were injured. The Point has seen many ambulances of the Ministry of Health evacuating causalities to health facilities in Banjul, but couldn’t transport all causalities at a time as many were affected.

The fire fighters worked hard to end the incident but inferno continues blazing from different dimensions making it difficult for fire fighters to contain and completely put off the flames. That was the main reason why many got injured.

As victims were being evacuated for treatment, some casualties were seen laying on the ground waiting on the evacuation team.

The many victims have definitely given health personnel tough time as they were running between the sea port and health facilities throughout.

Security personnel could be seen with modern communication system to communicate with colleagues and rescuing people during the exercise. The security officers had saved lives and properties as expected as well executed their operations smoothly.

During the exercise, Navy officers also found an improvised bomb within the GPA premises, but it did not explode. It was hidden in a strategic location by a suspect criminal who later revealed that he hid a bomb somewhere else in the sea port.

“This is the bomb we found here. It is harmless,” Lieutenant Abba Nyassi, commanding officer of the Navy officers told the press cheerfully.

At a news conference that was convened later, Yankuba Manneh, Communication Officer for GPA, said the exercise is in accordance with International Ship and Port Facility Security (ISPS) code.

“ISPS has seven functional requirements and the seven one is to conduct training, drilling and exercise so that different stakeholders can familiarize themselves with the rules and procedures of ISPS,” he said.

Aboulie Touray, from office of National Security said: “The exercise is intended to test the ability of different emergency respond teams. The activity is accord on four pillars that is gear towards preventing the country from bad guys including terrorism.”

He reminded that four pillars include prevention, pursuing culprits, protection of the territory to ensure criminal cannot access any place in the country and the fourth is how to respond on such emergencies 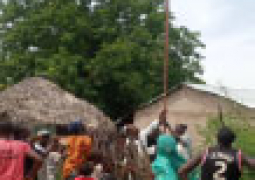 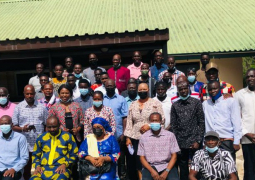 The Monitoring Control and Surveillance Unit  Department of Ministry of Fisheries and Water Resources recently convened a three-day capacity building to strengthen the capacities of fisheries observers. 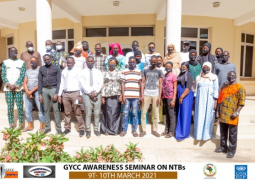 Soma and Farafenni are two busy settlements where under-aged children are continually ordered by their Arabic teachers or Qur’anic masters to go begging.