Jesus said, “I am the resurrection and the life; he that believeth in me shall never die”. John 11:25

Here we are, commemorating another Easter! Despite the troubled times, we have to celebrate our risen Lord, for the spirit and courage of Easter goes on.  The stay-at-home situation is new for some people, but not for those who have been housebound, sometimes for many years, due to sickness or age. To have to spend more time and interaction with our household members is a good thing, although for some, the stay-at-home situation has intensified the challenges they face in strained relationships. On the whole, everyone is having to reflect on fundamentally important aspects of human life, of their own lives and how they want to live them when the usual freedom of movement is severely restricted. This is a good time to reflect on what in our lives really matters, and how we live intentionally in such a way that we truly put those things first which matter most. – What are the right priorities in a time of the new corona virus pandemic? What role does God play in public life, here in The Gambia and also abroad, and anywhere in the world? What role does God play in our personal lives, and in how we spend our times as families?

The disciples of Jesus went through a similar stay-at-home situation after Jesus died. They were in fear for their lives because they had been with Jesus. In fact, Peter, one of Jesus’ closest disciples, denied that he knew Jesus when he was arrested. All the other disciples deserted Jesus, to protect themselves from those who killed him.

Although they stayed together, they hid themselves away, went into lockdown in that famous Upper Room (John 20:19), where they had shared the last supper with Jesus. Now, they were hiding away, full of fear. Mournful, full of frustration, and anxious, for they had lost their leader. They had witnessed how he was tried in a mock trial, tortured, crucified, pierced with a spear. They saw how he breathed his last breath, how his body was taken down from the cross, and they buried him in a tomb.

Today, together with the rest of the world, Christians also have to stay at home with immediate family and households, indefinitely, due to this pandemic. Like Jesus’ disciples, the stay-at-home is uncertain, and like the disciples they are asked to pray to Almighty God to enter their situation and bring wisdom and guidance to their lives. They can and must pray to God for his gracious intervention, they must intercede for the world, and pray that God will bring an end to the pandemic, so that there will again be freedom to move around freely, freedom for everyone yet again to go about their daily lives freely and without fear for their lives. All of us must make time and pray.

How could he? – They had witnessed how the crowds cheered at the crucified Jesus and how the leaders scoffed at him, saying, “He saved others; let him save himself if he is the Messiah of God, his chosen one!” They saw how the soldiers also mocked him, coming up and offering him sour wine, and saying, “If you are the King of the Jews, save yourself” (Luke 23:35-37)! – And yet, Jesus died, and all their hopes were dashed.

It is after this time of anxious self-isolation and worried anticipation that everything changes. On the third day, the disciples are faced with reports of an empty tomb. Jesus’ body had gone, it was not any more where it had been buried. In John’s Gospel, Mary Magdalene informed the disciples that the large stone at the grave had been rolled away and Jesus’ body was not in the tomb. Peter and John went to see for themselves and confirmed the empty tomb. By the time they leave the tomb, they have come to believe what Jesus had told them. Now, they believed in the resurrection of Jesus.

As Mary Magdalene had continued to stay by the tomb, she became the first person to see Jesus in his resurrected person. Then two disciples met Jesus on the way to Emmaus. After that, all of his disciples saw him, first without Thomas, and then a second time with Thomas. At one time, about 500 people saw him, all at once.

What lessons can we learn from Easter? How does the celebration of Easter help us in our current, worldwide crisis?

First, let us be patiently confident rather than anxiously suspicious.  Let us not join those who constantly criticize everything, those who willfully oppose all that is not in their personal interest or agenda, those who promote only themselves and things that are unproductive and harmful to the common good, because they spread fear and despair.

Rather, in this unprecedented situation, where there is so much beyond our control, let us be patiently confident, especially our youths. Let us be people of hope who share faith, hope and love with all who are worried and depressed.  Let us spread confidence and trust and share with others how the sure knowledge of God’s love and mercy in our daily lives gives us confidence and enables us to be patient and hopeful.

Second, let us be loving and caring. What resources do we have to be kind to others in practical ways? Let us share with others, generously in word and deed. Why?  Because God loves all of us and has already given us so much in Jesus Christ his Son’s, death, burial and resurrection. There is no-one in this world who does not deserve love and life.  In Jesus we see God’s life and love manifested for all peoples in the world. Forgiveness and unconditional love will never be overcome by hatred and malice. Let us change our hearts and transform ourselves to be the people of God he has created us to be.

Third, let us comfort those who mourn.  Many are dying around the world, and there is so much pain and heartache, everywhere. In a time when so many die so quickly, where can comfort be found? – It can only be found in Jesus, who said: “I am the resurrection and the life” (John 11:25).

To those who have lost loved ones and ask who can save them from death and give them new life, to those who fear for their own lives and are afraid of death, Jesus Christ says: “I am the resurrection and the life.”

To those who are mournful and sad because Easter this year is not being celebrated in the usual way, be comforted and be encouraged. Remember that Jesus Christ rose from the dead, and that he, Jesus, will also raise us and our loved ones from the dead, if we believe in him as our Lord and Saviour.

Christ is risen! He is risen, Indeed! Alleluia! May Almighty God comfort and bless you and your family this Easter. 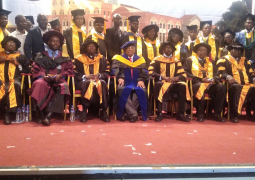 At least 115 students recently graduated at the American International University of West Africa (AIUWA) during its 5th graduation held at the school ground. 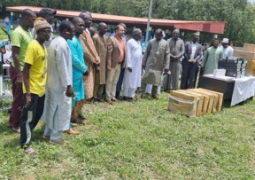 SRPEP presents D15M worth of surveillance equipment to GLMA, DLS

The Small Ruminant Production Enhancement Project (SRPEP) under the Ministry of Agriculture recently handed over surveillance equipment worth D15,140,000 to the Gambia Livestock Marketing Agency (GLMA) and Department of Livestock Service (DLS) at a ceremony held at Abuko Livestock Complex. 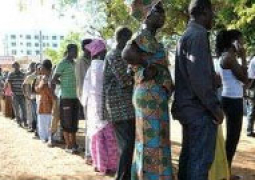 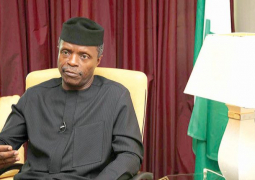