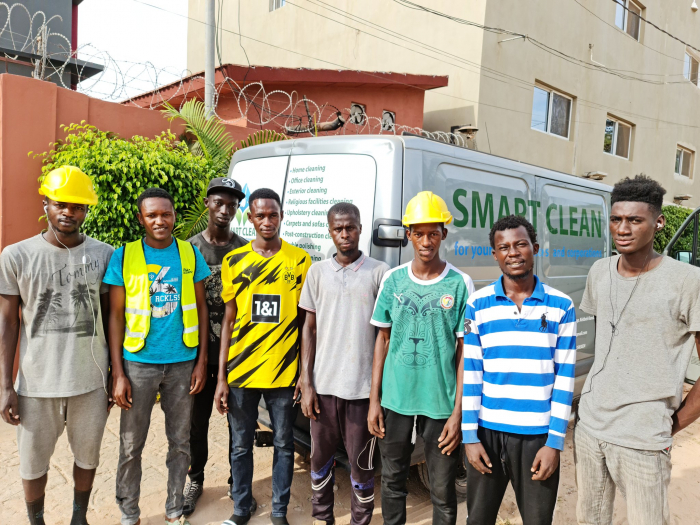 When Mr Abass Bah started “Smart Clean” as a business to clean homes, offices and corporations, he had only two staff. Mr Bah today employs 20 staff as his customer base expands. He has even bought an additional van to facilitate the services his company renders.

After completing school in 2012, Mr Bah worked as a cleaner in a hotel for a few years before conceiving the idea of starting his own business. The use of modern technology and equipment to do his job intrigued him at the hotel. So, he ventured into setting up his own with just D5, 000 capital and other little support from friends.

In 2019, he cleaned the offices of Mr Mustapha Njie, the leading housing and real estate mogul in The Gambia. Satisfied with the services, his work turned into fortune when he won a D250, 000 startup investment from Mr Njie’s foundation.

“The allocation to Ministry of Youth in The Gambia is very low compared to the activities of young people. They are the bedrock, the engine and fulcrum of national development endeavours,” said Mustapha Badjie, deputy director of the National Youth Service Scheme.

Every year, the NYSS receives hundreds of applications from young people to acquire training in technical skills like carpentry, building construction, electrical installation, sewing, welding and others. Yet, they lack funds to support start up their ideas like the one Abass enjoyed.

“If we believe in those virtues for our youths, then we have to give them some better allocation through their line Ministry,” Mr Badjie added.

He described entrepreneurship as “the drive” in any economy and for any enterprise, the young people become such drivers.

“For Gambia to change our development paradigm, we have to invest in entrepreneurship for young people. Hence the budget allocation is very, very small compared to the needs of these youths,” he argued.

However, they are not sufficient to stimulate real growth for enterprises.

On its website, YEP said it supports development of sectors such as IT, handicraft & fashion and tourism to offer better opportunities to youth leaving the rural areas in search of non-agricultural jobs.

It is also investing to enable value addition in the agri-sector and empowering it as “a vehicle for economic growth – a knock-on effect on related sectors, potentially multiplying the employment opportunities in local services around agri-businesses such as packaging, logistics, mechanical repairs, web design, IT services and communications.”

The project takes a market-led approach to improving the skills and employability,” While about 60 per cent of the population is under 25years, there are high levels of youth unemployment. Poverty and lack of employment opportunities are among the major reasons driving an increasing number of youths to leave the country,” the agency said on its website. “Irregular migration to Europe are putting Gambians at risk and harming the country’s social cohesion and economy. To turn the migration movement, more jobs and opportunities need to be created at home,” it added.

“The needs of the youth are many and varied. Hence there is a need for more allocations. Channelling some youth projects through other sectors like agriculture is not enough. If funds are given to agriculture or fisheries, yet remain inaccessible to the youth for enterprise development, they just remain lying about in the coffers not fulfilling their purposes,” Badjie maintained.

But if 10% of the national budget is allocated to the youth and employment sectors, would it make some huge difference? I asked him.

For Mr Abass Bah, managing director of NEDI, a 10% increment will absolutely mean that NEDI and all the players in the entrepreneurship ecosystem will be able do more in the area of youth enterprise development.

For Mr Marr Nyang, a budget analyst and researcher who is executive director of the NGO Gambia Participates, government “has been smart” in shifting allocations from Ministry of Youth and Sports, claiming to allocate it for other enabler sectors such as education (in order to give youths such accesses); trade (to create employment for young people and other programmes…).

Mr Nyang explained that to understand the implication for such allocations, one has to look at sports development trends around Africa and the world.

“Our young people have been making global names for themselves in athletics and football over the years. Gina Bass comes to mind as a global record setter in athletics. Yet she goes through tough times in meeting her needs at home. Binta Nyang made it to the Paralympics in the UK as a medalist and in the absence of real motivation to push her further, she is now back to begging in the streets to fend for herself,” Mr Nyang cited.

He further lamented that the state of the country’s main national stadium and its facilities. These he said, are so out of date and old fashioned. Its capacity is limited to cater for fans of just Bakau and Banjul combined. Yet, the country is blessed to have a national football team making names in international competitions.

“The D113million allocation is not even going to young people altogether. It is allocated under government local fund (GLF). Only 15 percent of this allocation is going into development while 84 percent goes into recurrent expenditure (salaries, operations, etc),” he laid bare.

Such figures are nowhere around “sufficient allocation” towards development of country’s youth sector by government. “For the lack of access to finance by entrepreneurs and industries development, the Ministry of Trade, Employment and Regional Integration is allocated just D106 million in 2020 – that is far less than Youth and Sports Ministry. For 2021, that amount has been down to D100 million. How do such allocations encourage youth development? How does government interpret these to mean they are interested in or seriously investing in youth development?”

Who will finance it?

To him, these constitute the “biggest challenge” to entrepreneurship and agro-processing industries: “Access to finance and lack of financial inputs remain the biggest hurdles in my efforts to expand the business to desired levels,” he said.

Njie has a 23-year-old ICT background with co-ownership in several other companies. He served as ICT manager including head of technology at GTBank, Reliance Financial Services, UNDP. He started at the GTTI as a student, later became a lecturer and then furthered his studies in the UK and the US. 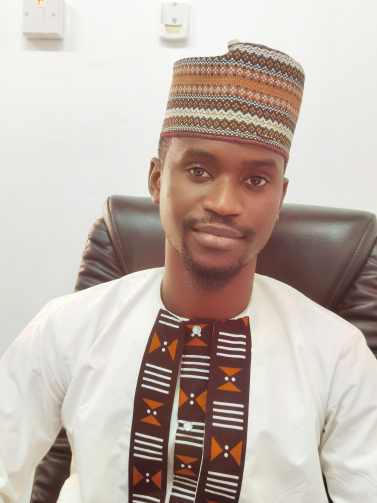 As a technology innovator, he developed the idea to explore his passion for agriculture even when he was never a farmer. Today, his company, Farm Fresh, brings solutions to the problem of marketing that farmers face each time they harvest.

Instead of leaving them to sell at losses to middle-men dealers, Farm Fresh offers them an online market to sell products directly to customers.

But Mr Njie had no such startup fund like Tekki Fii or the one enjoyed by Mr Bah when he started. He instead used funds from his other businesses to build up this company. His ICT expertise was used to create the said platform and he kick-started his idea into live in 2015.

He had no need to pay someone to develop solutions for him. Other operational costs still became a burden even when he had IT skills to develop the platform and added online tools from his knowledge.

“The services get rid of middle men players in the equation… when farmers lack access to storage facilities, they are compelled to sell products quickly to avoid wastage or perishability. Middlemen offer them prices that make them even poorer,” he explains.

Hence, he initiated Farm Fresh to address a social need to help farmers access markets. It also provides an option for the busy working class who do not have the time to go for physical shopping to purchase online, have them delivered to their home.

His dream is expanding (more stores around the country and beyond the Gambia), coupled with a desire to venture into processing these fruits into local juices. His target is to employ at least 50 workers in coming years.

“In the absence of such incentives, I decided to start with baby steps instead of going big, which would require crediting funds from commercial banks to repay with high interests. So, I operated from my home for the start. In 2015, I won $5,000 grant from the Tony Elumelu Foundation. This became our first investment,” he explained.

In the absence of such government intervention policies, Mr Njie advised entrepreneurs to avoid loans unless they can be justified or paid within shortest possible time.

Meanwhile, for the real estate mogul Mustapha Njie, who set up TAF Foundation to support youth entrepreneurs in The Gambia, this country could only reduce unemployment through financing such entrepreneurship initiatives.

“I saw Abass Bah with two employees, two years ago when he cleaned my house. Today he has over 20 employees and a van after winning D250,000 as the Second Runner Up of the TAF Startups 2019. Let's reduce youth unemployment through such schemes,” he said on Twitter as he posed with Bah and his team of employees. 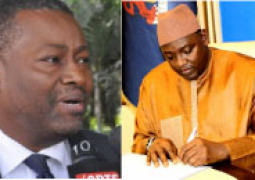 While presiding over the official opening ceremony of the Legal Year at the High Court Complex in Banjul on Sunday, President Adama Barrow took the opportunity to acknowledge the significant work by the National Human Rights Commission (NHRC). 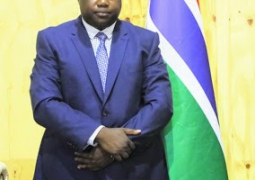 During the 7th Cabinet Meeting held on 22nd October 2020, Cabinet mandated the Attorney General and Minister of Justice Dawda Jallow to proceed and initiate a dialogue among all stakeholders with the view to reaching a consensus over the draft constitution.