Banjul, Jan 19 - Two young Gambian doctors will study in Cuba the specialties of Gynecology and Obstetrics, and Intensive Therapy, after the authorities of the largest of the Antilles grant two free scholarships to this nation, as part of their historic solidarity collaboration with Africa.

Modou Alieu Jallow and Lamin S. Minteh were selected by the Ministry of Health of their country to begin these postgraduate studies on the Caribbean island, where they will travel soon.

Graduates of doctors in the Venezuelan branch of the Latin American School of Medicine (ELAM), and after practicing in the Gambian regions of Basse and Bansang, both doctors will deepen their knowledge to become future specialists.

In a meeting held on Tuesday with the Cuban ambassador here, Rubén G. Abelenda, Jallow and Minteh thanked the Caribbean nation for its eternal solidarity with this continent, and particularly with the people of this West African state.

They manifested their commitment to become good specialists to serve their compatriots in the future, and to raise the names of their country and Cuba.

Both sister countries have maintained a close collaboration in the field of health for more than two decades, translated into the uninterrupted stay in the Gambia of a medical brigade from the Caribbean island, which includes doctors, graduates and technicians, as well as professors, who teach at the Banjul University School of Medicine. 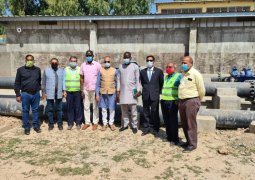 High Commissioner (Designate) G V Srinivas visited the water project on 7 February 2021 while in The Gambia to present credentials to President of the Gambia H E Adama Barrow on 9 February 2021.