Announcement of the coming of the Vice President Dr Isatou Touray to preside over the opening of the festival on behalf of the President of Republic of The Gambia His Excellency Adama Barrow added more value to the celebration as all cultural groups came out to perform in their best in an endless mood.

Apart from the defunct International Homecoming Roots Festival, the recently celebrated 5th edition of the Janjangbureh Kankurang Festival becomes the most spectacular cultural event; well crafted, planned and attended as the population of the Island was twice doubled while all available accommodations were over booked.

Thefestival was covered by both national and international media with few local electronic and online media giving a live stream of the event which attracted high dignitaries from not only the host country but beyond the shores of destination Gambia with some numbers of tourists to the community.

Inter cultural and tourism dialogue; Janjangbureh Marathon, community based tourism tours; with parade of over 10 different kankurangs and also the show of other masking traditions of The Gambia were the order of the day.

As the festival had been moribund for more than two decades before its resurrection five years back, Vice President Dr Isatou Touray said therefore, it needed much effort to wake it back to full life.

She noted that, “luckily, the level of commitment we received from the chiefs, governor, youths through the EMC and the relevant sector and the Ministry with its satellite institutions – NCAC, GTBoard and GTHI was such that as early as the 2018 edition, hopes were raised that the festival will become one of the most look forward to in the National Calendar of Festivals.”

The level of participation by the community and the invited masquerade guests, according to her, was of high level and this has helped to encourage people to come from far and wide to attend the festival.

She added that the intervention by the YEP since 2018 has been a big boost to the festival “such that we are now on the 5th edition. And besides the financial support accorded to the festival, YEP has also worked with other relevant stakeholders to widen the capacities of the local organising team in events management and festival organisation.”

So, the visible improvement in terms of content of the festival, its organisation, its scope and its attendance is a clear testimony to the YEP support, she stated.

VP Touray, however, disclosed that government’s aim of the festival is to use it to restore the town as the cradle of the Kankurang, which in 2008 was extolled as a UNESCO Intangible Heritage of Humanity. And “another aim was to promote tourism in the Island and add to the numerous tourism attractions in the form of a festival which will be themed on the Kankurang.”

The Minister of Tourism and Culture, Hon. Hamat N.K. Bah, the host minister, thanked His Excellency Adama Barrow through the Vice President Dr. Isatou Touray for government support towards celebration of the festivals in The Gambia.

By extension, he thanked VP Touray for making it to the Island to celebrate the festival with the residents; guests and delegates who had descended on the town to witness and have not just only experience of the Janjangbureh Kankurang Festival but the tourism and hospitality of The Gambia.

Minister Bah quickly applauded everyone present while he fully recognised the presence of representatives and guests from Senegal. More so, he particularly thanked - YEP, UNESCO NATCOM; GTBoard; GTHI and NCAC; among other partners for their support. 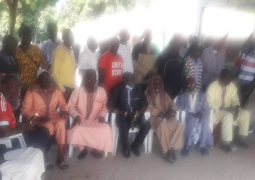