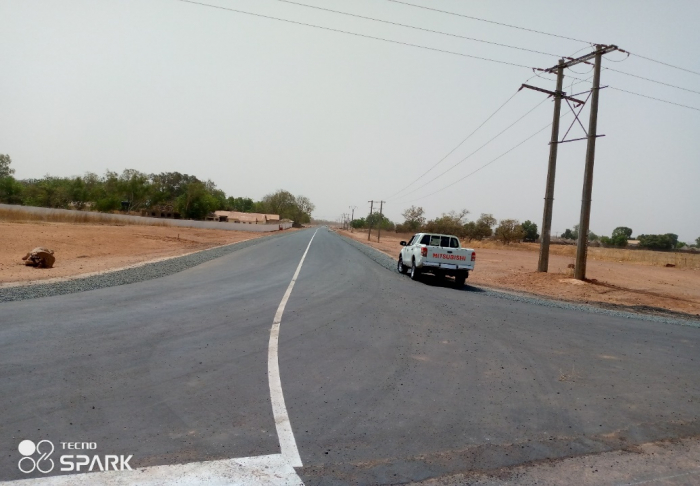 The people of the Upper River Region (URR),of all walks of life, living in the North Bank and along the newly constructed Lamin Koto -Passamas Road of 122 kilometres, have welcomed this long-awaited project of over 40 years of promise and planning.

The project marks an important milestone in the drive to complete the National Primary Road Network, the deficit that existed mainly in the URR. The people of the Region generally commended the government for bringing a closure to their dream of having a first-class road, which would improve their livelihood, after many years of neglect by previous governments.

On Thursday, 25th February, 2021,a team from The Ministry of Transport, Works and Infrastructure (MoTWI), comprising myself as Assistant Information Officer, Bekai Kanyi, Road Safety Officer and Omar Saidykhan, Divisional Engineer from The National Roads Authority (NRA), visited Lamin koto-Passamas and Kaleng-Bush Town by-pass, Sare Ngai, Yerobawol, and the new Basse bridge currently under construction. We wanted to record the views and reactions of the members of the stakeholder communities, after the commissioning of the road projects in the area.

Malang Kuyateh, head teacher, Kaleng Lower Basic School, told us that the construction of the Kaleng Bush Town road came as a blessing to them, thanks to the Government of President Adama Barrow. He recalled those days when the road was not constructed and how horrible it was to travel to Bansang and other parts of the region.

“Now that the road is constructed, we find it much easier to move from one place to the other without any difficulty,” he said. He appealed, nonetheless, to Government through The National Roads Authority- NRA, to install speed bumps at the entrance of his school, as most drivers are always on high speed, which poses serious and constant threat to the safety of the pupils of his school.

Ebrima Sanneh, a native of Niani Dobo, expressed satisfaction on the Kaleng-Bush Town connection. He revealed that they used to find it extremely difficult to reach Bansang to sell their farm produce. “Now that we have this new road, travelling to Bansang is no more a nightmare to us,” he added.

Mariama Jallow, a food vendor at the ferry crossing point in Bush Town, disclosed that the construction of the new road has increased her daily income. “I am really happy that this road is commissioned and my business is booming,” she said. Nonetheless, she appealed to the drivers on the road to always drive carefully and observe traffic rules.

Muhammed Fatty in Samba Gabude also expressed his delight of the commissioning of the road. Mr. Fatty, however, was concerned about the high speed at which most drivers drove, especially when approaching or within the villages along the new road.

On Friday 26th February, our team visited the Lamin Koto to Passamas road, and the Yerobawol to Basse road connection. Our first stop was in Madina Yero in Wuli. We visited Tabuna Baldeh, the Alkalo of the village. Tabuna revealed that in the past moving between Yerobawol and Basse was extremely difficult. He thanked The Government for providing that vital and necessary connection for the people of the area.

Mr. Sulayman Bayo, the Alkalo of Passamas also expressed his happiness at the construction of the Lamin Koto to Passamas road.   He revealed that before the construction of the road, he could recall at least three pregnant women from his village who had died on their way to hospital because of the poor road network.   He said he could only thank the Government of President Adama Barrow for constructing the road.

Saibo Keita, a native of Passamas and a Quranic teacher, requested for speed bumps to be constructed around the Arabic school along the highway. He noted that his pupils find it difficult at times to cross the road due to the high speed of the passing vehicles. “We are very concerned about the frequent accidents along the road. Drivers mostly are driving at very high speeds perhaps because of the good condition of the road. I am appealing to The National Roads Authority to install speed humps,” he added.

Isatou Fatty, a native of Nyakoi Kerewan in Wuliand a grade nine student at Mulumbas Junior School, stated that she normally crosses to Basse, Mondays to Fridays, to go to school. She said she used to miss her first morning lessons because she has to wait for boat owners to ferry her to Basse. Isatou expressed her joy over the construction of the new Basse bridge.“When the bridge is completed, crossing between Nyakoi Kerewan and Basse would be easy and fast for us the students, and would enable us to attend classes on time,” she said.

Mamadou A. Jallow, NurseIn-Charge at Yerobawol Minor Health Center, said that previously, they found it difficult especially during rainy season, to access communities for their monthly clinics due to the poor road condition. He commended the Government for constructing the Basse – Yerobawol road, stating the road has greatly improved health service delivery in Wuli.

Moving more into the interior of the country, on Saturday, 27th February, 2021, our team visited Sare Ngai gravel road and the Basse bridge. At Sare Ngai, the team met with ASP Krubally, Station Officer of the Sare Ngai Police station. Speaking to the team, ASP Krubally expressed delight on the construction of the gravel road, citing that the road has made their work easier, since most people now use the by-pass instead of other feeder roads. Similarly, Sergeant Augustus Jammeh of the same police station, also expressed similar sentiments. He urged authorities to put more road infrastructure such as speed bumps in order to reduce high rates of accidents in the area.

Later that day, the team met with Alagie Mba Jobarteh, a boat owner, operating at the Basse – Nyakoi Kerewan crossing point.  Speaking on behalf of the boat owners, he said that since the commissioning of the road, they have received more customers and have generated more income as compared to the previous years. However, he disclosed that most if not all of them would be out of business upon completion of the bridge. He appealed to government to assist them before the bridge is commissioned.

Samba Bah, Governor, Upper River Region, expressed his delight at the tremendous work that the Ministry of Transport, Works and Infrastructure is doing in his region, notingthat people can now transport their farm produce and goods to different parts of the region without delay.

He also revealed that schools, health care services, weekly markets locally known as “Lumos,” all can easily be accessed.

Our team found out that in general, the affected communities of the road and bridge projects in the URR have expressed profound appreciation with the new developments, which they said are already yielding benefits in terms of accessibility to heath facilities, schools, farmlands, and markets. The main issue, however, they highlighted frequently was the new danger of speeding vehicles on the new roads. They appealed for the construction of speed bumps and the presence of the Police to manage and minimise the growing road accidents. Otherwise, they thanked the Government for the remarkable developments. 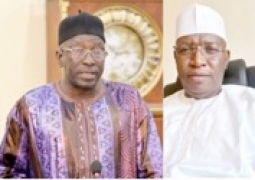 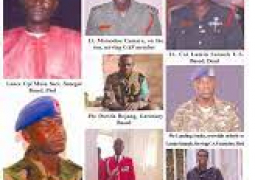 Modou Njie, a soldier of The Gambia Armed Force (GAF), yesterday testified before the TRRC on the account of the December 30th attack, which took place at the State House. The attack was aimed at removing former President Yahya Jammeh from power.