In a letter dated 20 April 2022 and addressed to the President, Sheriff Muhammed Kijera, chair of the Center's Board of Directors put the following questions to  President Barrow in the wake of the nomination FTJ and Seedy Njie to the Parliament: "Have you taken time to reflect on why and how you became President of the Gambia? Did you forget the past from which the Gambia came and what were the aspirations of the people as they voted for you?"

"In your 2016 Manifesto, your promised to ensure transitional justice and accountability for the violations of the past. How do you reconcile that agenda with the nomination of Fabakary and Seedy today as leaders of the highest organ of the State?"

"We may not be able to remove these individuals from this noble house, but rest assured that most Gambians hold that Fabakary and Seedy lack the moral, legal, and political legitimacy to be in this position."

The center further added that the presence of Fabakary and Seedy Njie in the National Assembly is a dishonour to that honourable house and it shall be regarded as such so long as they walk within the walls of the Assembly.

"Fabakary and Seedy shall always be remembered as undesirable citizens who unleashed intolerable trauma on Gambians as they plunged this country into a nerve-racking political impasse that nearly threw our motherland into flames."

"It is therefore with utter shock that you would find no Gambians worthy of this high office other than Fabakary Tombong Jatta and Seedy S.K. Njie! Mr. President, be informed that we, the victims of human rights violations of Yahya Jammeh feel deeply hurt and betrayed."

"We are deeply concerned that as we await your White Paper on the TRRC Report, these nominations make us doubt if we will ever get justice.

"It is obvious that as Speaker, Fabakary will not provide the necessary leadership and support to the implementation of your White Paper or the TRRC Report itself, simply because Fabakary and Seedy have glaringly showed their utter disdain for the TRRC and the entire transitional justice process."

"It is on record that Fabakary has led the APRC since 2016 to actively and vigorously reject, discredit and ridicule the TRRC and every other effort, institution or individual including your former Minister of Justice Abubacarr Tambadou, who seeks to bring justice for victims of Yahya Jammeh."

"How therefore could you nominate such a person to lead the main body that ultimately bears the primary responsibility of making laws, approving budgets, and scrutinising institutions that are responsible for the implementation of the TRRC Report?"

"Mr. President, we consider your nomination of these two individuals to be grossly irresponsible and poor leadership that can only further divide Gambians hence endanger the peace and stability of this country."

"The norm in the civilised world is that countries that underwent armed conflict or authoritarian rule first unearth the truth about the violations that happened and then ensure accountability leading to reparations, reconciliation, and reforms."

"It has never been the case that key perpetrators of violations would be rewarded with high political offices even when the truth is not yet fully unearthed." 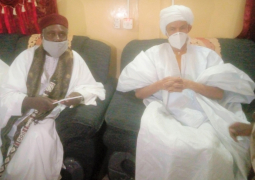 His highness Sheikh Mohamed El Havedh Ennahoui, a well-known scholar within Africa and beyond yesterday visited the Imam Ratib of Banjul, Alhagie Cherno Alieu Mass Kah and had discussed about Islam and the continued peaceful bilateral relationship between The Gambia and Mauritania.