TRRC recommends  Jammeh be  investigated,   prosecuted for the  murder of Deyda

The recommendations that was unveiled from the Truth, Reconciliation and Reparations Commission (TRRC) Criminal Liability on Friday, urged that former   President Yahya Jammeh be investigated and prosecuted for the murder of Deyda Hydara, the disappearance of Chief Ebrima Manneh, the arson attacks on Radio 1 FM and The Independent Newspaper and torture of all journalists and other persons mentioned in relation to the Freedom Online Newspaper issue.

The commission’s recommendations continued that an investigation be carried out for the purpose of prosecuting the Junglers who participated in the murder of Deyda Hydara, the arson attack on Radio 1 FM, attacks on The Independent newspaper and torture of the journalists and other persons mentioned in relation to the Freedom Online Newspaper issue bearing in mind any recommendations for Amnesty that may be made in relation thereto.

“A study be carried out on the Criminal Code and the Criminal Offenses Bill 2020 and the Criminal Procedure Bill 2019 with a view to removing/repealing or amending any provisions contained in it that are repressive or unduly restrictive or inimical to freedom of expression and of the press in a democratic society.”

“There should be a review of domestic laws relating to the media and carry out a comprehensive review of the regime with a view to bringing The Gambia’s laws regulating the media in line with international standards and international best practice. Such a review shall include the National Media and Communication Act 2002, The Newspaper Registration and Broadcasting Act, and the Information and Communication Act 2009.”

On government’s responsibilities, the commission tasked with immediate effect, repeal all repressive legislation, including legislation that does not comply with international and regional human rights law, particularly the Information and Communication (Amendment) Act 2013 and Criminal Code (Amendment) Act 2013; being criminal libel and defamation. The Newspaper Act; take all necessary steps to ensure that all journalists are able to freely exercise their right to freedom of expression without fear of arrest, detention, intimidation, or harassment; and ensure media and freedom of expression provisions contained within the Constitution comply with international standards, as outlined under article 19 of the International Covenant on Civil and Political Rights (ICCPR), according to the TRRC report.

The commission further recommends to the government to continue making progress in implementing ECOWAS Court of Justice decisions on ending impunity for crimes against journalists, in particular by ensuring persons responsible for the 2004 murder of Deyda Hydara, the 2006 enforced disappearance of Ebrima Manneh, and 2006 torture in custody of Musa Saidykhan, are brought to justice and implement the decision of the ECOWAS court decision of 2018 which called for the repeal of harsh media laws including sedition, insult, false news, and criminal defamation. More recommendations were made on the freedom of expression and media. 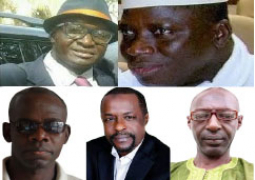 An APRC top militant Samsudeen Sarr yesterday estimated that 60% of the APRC militants that attended former President Yahya Jammeh’s phone call address at Kanilai were with the belief that in December 2021, the Russians will forcefully install Jammeh as President of The Gambia.