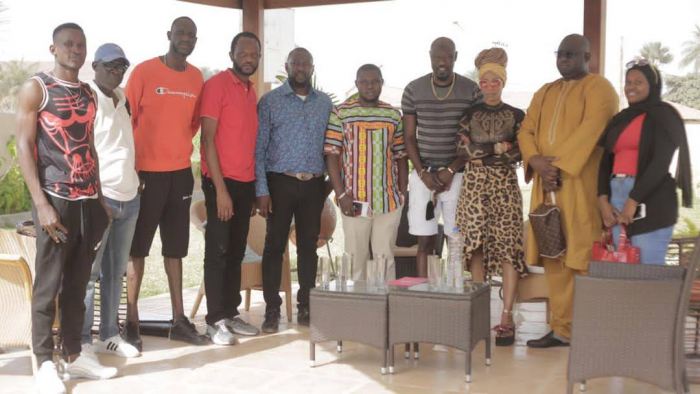 These well-known faces across Gambia and Senegal have appeared in many films, TV series and production over the past 20 years. They have an ambition to uplift the Gambia’s film industry and they will be taking part in the series that would feature many young and old talented Gambians.

The film that is believed to set the benchmark of African TV for the next generation, would take viewers on a rollercoaster of an adventure through weekly episodes.

Speaking to the executive producer, Assan Saine, a UK based Gambian who had a meteoric rise in the realm of video production, explained the concept about the series. He said ‘Haalise’ is a mini-series comprising about 52 episodes and would be produced for 12 months.

“It’s written by ex-Hollywood scriptwriter and producer Allan Dodgeo and a mindset of a Gambian called Momodou Alpha Jallow who is based in the UK. We created Jotaibi, an online platform where we stream videos that are launched in Africa. We have series of different programmes comprising movie, music and other entertainment programmes. It’s just like Netflix and we target Gambia, Senegal and Africa at large.”

Assan, who produced work for major London corporations and organizations, said the series is based on a multimillionaire Gambian who has seven hotels in Gambia with a dysfunctional family and lot of character flaws.

“Some of the main casts are from Senegal and that was deliberate so that we get that magnet, interest of the people because the three main characters are already known in Senegambia region and having them on board will bring curiosity for many to watch the film. The other half of the characters would come from Gambia and some of the principal cast will as well be Gambians.”

The cinematographer said those chosen would sign a contract and they would be paid on salary basis.

Dwelling on the Gambia’s film industry, he stated that finance and awareness is needed to uplift the industry, saying filmmaking is very expensive and it needs good equipment, logistics and human resources.

“The companies need to believe in the filmmakers and sponsor as they did to the artistes like ST, Jizzel. The series is aimed to be played at the Jotaibi platform, as well as Netflix, stars and Amazon prime.”

Cheikh Gueye alias Sanex, an actor and staff of TFM, described Gambia as a peaceful country. He added that from 2005 to date, he has visited the country every year.

“That signifies the love and peace we have here because if I do not have peace, then we wouldn’t come here. Before our arrival in the country, we received a voice message stating that we should pass through the right procedures in terms of film, but I just wanted to let them know that we didn’t come to organise the film, instead we were called on. If there are procedures to be followed, then that should be done by the one who invited us.”

He told this medium that there should be no negative mindset, while stating that they are comedians and have undoubted experience. He added that they are in the country to choose the cast and the best characters to take part in the film.

The popular comedian said if Gambians keep trying, they will overshadow Senegal when it comes to films because of the English language. He added that Gambia needs to bring some Senegalese filmmakers on different aspects to nurture and train them.

“If that happens, within five years Gambia will be ahead of Senegal in term of films. Gambian films need quality and the government should help the actors in providing film school.”

The Gambia registered one covid-19 death yesterday, bringing the number of confirmed deaths to 100.