“To address this, in collaboration with our development partners, government will, in the next three years, create access to over six hundred and eighty-five (685) communities countrywide. Our target is universal access by 2025, which is earlier than the 2030 Sustainable Energy for All target. I am happy to observe that, so far, most of the priorities of the NDP and the 2017 Energy Roadmap have been successfully fulfilled. This puts the energy sector on a firm footing for bigger successes. We will continue to encourage private sector participation,” he declared.

President Barrow was speaking on Saturday in Brikama during the commissioning of 20MW plant worth $28.4M. The project is jointly funded by the government of The Gambia and its development partner, the Islamic Development Bank (IDB).

“With these reforms, I am confident that our 2025 target will be attained. Against this background, a comprehensive Energy Master Plan development is being developed to set the pace,” Barrow said.

The Gambian leader urges the Board and Management of NAWEC to re-double their efforts in boosting their generation capacity to support the government’s initiatives across the country. “We recognise also the efforts of the Ministry of Finance and Economic Affairs for facilitating the government’s counterpart contribution of Three Million, Two Hundred and Twenty thousand Dollars ($3.22 Million). As a government, we commend all those who contributed to the success of the project.”

“I renew my government’s pledge to continue on our development endeavours to power our homes, industries and economy into a brighter future. As we pursue our 2025 “Energy for All” agenda, I ask all citizens to remain vigilant and protect the infrastructure provided for you, and make the best use of the services put at your disposal.” 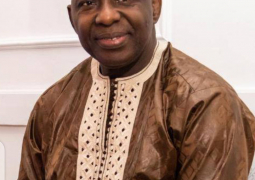 According to The Gambia’s Ministry of Health, the country currently has 24 people in quarantine. The country also has 19 COVID-19 patients in treatment or self-isolation (active cases).