Speaking during ‘Coffee Time with Peter Gomez’ on West Coast Radio on Tuesday, Sillah affirmed that his boss is actually not missing even though the majority of Gambians have not seen him in a little while.

When the host of the show Peter Gomez posed a question sent in by a listener enquiring if the Gambian leader is missing, the Information Minister replied in the negative.

“The President is not missing. He is running the affairs of the state, he is giving directives to the relevant ministers being in charge of crucial affairs of the country,” the Information Minister Sillah replied.

He further said that press releases are issued in the name of the president to respond to some of the issues that are of pressing nature, adding that is part of the normal running of the affairs of the state.

President Barrow until recently went into self-isolation when the Vice President Dr. Isatou Touray who is now free of the virus tested positive for Covid-19.

To the relief of many, the Gambian leader tested negative for the virus. It is important to state, however, that even before the president went into self-isolation, he had not been seen to be to be taking the lead in the fight against the deadly disease publicly.

In fact Barrow last addressed the nation specifically on his government’s measures to contain Covid-19 on 19 May 2020.

Although, he is said to be taking the lead in the fight against the virus, some government officials claim “it is arguable that majority of Gambians would have loved to see their leader frequently addressing the nation, to give them hope and to assure them that he is indeed in charge of the fight against perhaps the biggest crises the country ever saw,” a political analyst said.

The president’s failure to publicly take the leadership role as claimed by some Gambians has led to Civil Society Organisations and Frontline Workers in the country on Sunday giving a 72 hour ultimatum for him to address the nation on his government’s strategies in containing the rapid spread of the virus. 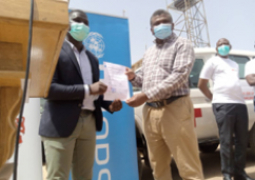