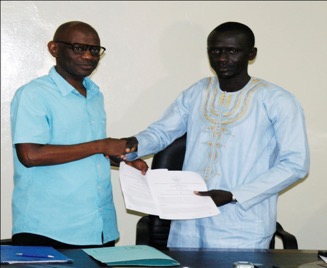 Speaking on behalf of the Minister of Tourism and Culture, Mamadi Dampha, DPS MoTC described the Mungo Park Memorial Obelisk as a much cherished historic sites.

He disclosed that the contract was duly floated and following the necessary procurement procedure, and was won by Touray Kunda Construction Company Limited.

The D4.039 contract, according to him, involves several components all of which relate to rehabilitation, conservation and value adding to the Mungo Park Memorial Obelisk. The first component of the works, he said, is to secure the site with a solid perimeter fence so that the obelisks can be protected from intrusion.

The second component of the works, he explained, is the erection of a site kiosk museum; the third component is the erecting of a water supply and solar lighting system while there will be visitor conveniences including benches “and according to the contract document, works will take 3 months to complete.”

He noted that these works are meant to conserve the site and to also add new attractions like the site museum so that the visitor experience will be greatly enhanced and the rehabilitation is in line with the policy of the government of his Excellency President Adama Barrow “to enhance the cultural and heritage sector to economic development and to project a strong Gambian cultural identity.”

Expounding on the Mungo Park Memorial Obelisk’s history, Hasoum Ceesay, Director General of the NCAC said the site was built in October 1944 by the then Governor of The Gambia, Sir Hilary Rudolph Robert Blood to commemorate the 150th anniversary of the arrival of Mungo Park, the Scottish explorer to the River Gambia region to start his journey to discover the source of the River Niger.

He reiterated that Mungo Park was a Scottish surgeon who was interested in discovering new territory for the imperial government of the United Kingdom, so, “in 1794, he was sponsored by the Royal Geographical Society to find the source of the River Niger. And he thought the best place to start the journey was on River Gambia where there were British traders in the area called Pisania now known as Karantaba Torro Sami District, Central River Region. But that mission failed and he went back to Scotland.”

DG Ceesay continued in explanation that “in 1805 he was again sponsored and decided to start the journey from Pisania where there was a British doctor called Laidley, classmate of Mungo Park, based in Pisania to prepare for his journey to find the source of the River Niger.”

“3rd May 1805 Mungo Park set out from Karantaba and the spot where he and his entourage set out for the journey is exactly the place where his obelisk is located. Unfortunately, on this second expedition he was kidnapped by some people who felt he was an intruder to their territory in a place called Busa in present day Nigeria and was killed,” he disclosed.

He said because of his tragic end the Mungo Park is today a household name and a hero in Scotland which is one more reason “we think it is very important as a tourism potential that needs to improve, to boost tourism in the country.”

The NCAC DG highlighted importance of the Mungo Park Memorial Obelisk which include protecting it for posterity; the legacy of the spot; contribution of The Gambia to the success of the international exploration especially the help of explorer like Mungo Park by local Gambian chiefs and women such as the Siagnaries people called malatas. Also, this work will add value to a major monument and site thereby making it more productive in terms of revenue to the NCAC and boosting of cultural and rural tourism.

Oremi Joiner, Chairman board of director of NCAC applauded the NCAC for taken a bold step to revamp the site for posterity, adding that, the Board and the Centre have been trying on how to make the historical artifacts in the country be visited by students of different schools, tourists and general public, “this has caused us to work hand in hand with the MoTC and GTBoard.”

Alagie B Touray, CEO and Managing Director of Touray Kunda Construction expressed gratitude for the trust bestowed on him and company to rehabilitate the Mungo Park Memorial Obelisk.

He promised and assured not only the NCAC but MoTC and other stakeholders to deliver as expected, on time and satisfactorily.

Michael Campbell, Museum and Monument Officer at NCAC presented a PowerPoint presentation of the prototype of the Mungo Park Memorial Obelisk. 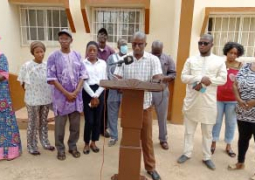 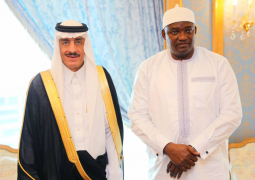 Amadou Keita, a senior finance manager of Gam Petroleum, who continues his testimony in the economic crime case involving the former Operations manager and general manager of Gam-Petroleum, Saihou Drammeh and Lamin Gassama respectively, told the court that his institution has taken a civil lawsuit against GACH Global, Fortune, Castle Oil Limited, Aqua Energy and Afrique Oil and Gas for supplies made to them under negative balance.