He explained that when the information of Shering’s death reached him, he became speechless and shocked. According to him, he got the information through a call he received around 9 p.m. from Hadim Faal who was with Sering.

“Hadim told me to join him at the Kanifing hospital where I was told by the paramilitaries at the ground that my cousin was killed at Westfield Monument. I asked who killed him but they replied that the perpetrators were unidentified.”

Mr. Jobe said Shering and his brother were out to free up their minds and enjoy the feast at a musical concert at the monument, saying it was so unfortunate that the country’s security is less functional. He added that the paramilitaries further told him that the DJ and the man who organised the programme are both apprehended by the police for questioning.

“When the police informed me about the incident, I overreacted because I was unconscious. I complained about where the security was at that moment because the incident wasn’t late at night. In that territory people were there, the Trust Bank is there, GAMTEL, Courthouse and other relevant places.”

“Shering and Hadim were working throughout before the Koriteh and needed to free up their minds, which was the reason they went to Westfield. Shering was having a bag and mobile phones, in fact paramilitaries found 2330 dalasis on Shering’s bag but the phones were taken away by the criminals.

Our source who is familiar with the incident told this medium that Hadim returned to Senegal due to unconsciousness he suffered from the incident. 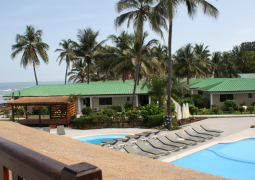