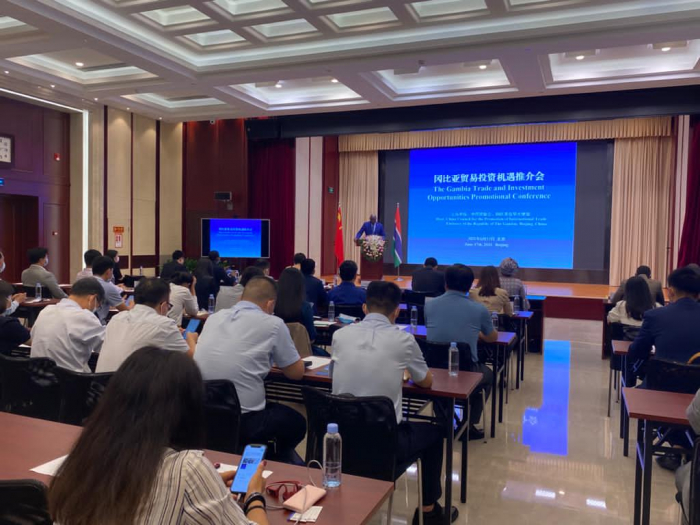 The event, which was presided over by His Excellency Masanneh Nyuku Kinteh, ambassador of the Republic of The Gambia to the People’s Republic of China, was attended by Ms. Fatou Kinneh Jobe, deputy head of Mission, the Embassy staff, Mr. Xu Liang, deputy director general of China Council for the Promotion of International Trade (CCPIT), and fifty-six (56) Chinese Enterprises.

In his opening remarks, Ambassador Kinteh extended congratulations on behalf of the government of the Republic of The Gambia to the government and People of the People’s Republic of China on the celebration of 100th anniversary of the founding of the Communist Party of China (CPC).

Ambassador Kinteh assured the Chinese entrepreneurs that The Gambia is now open and safe to travel for work and leisure taking into consideration the effective health measures put in place by the government of The Gambia that have limited and controlled the spread of the coronavirus.

He applauded China-Gambia relations which have entered a new stage of strong development within the framework of the Forum on China-Africa Cooperation (FOCAC).

He acknowledged the duty-free trade agreement signed between The Gambia and China and encouraged Chinese investors to take advantage of this initiative and invest in The Gambia in the areas of industrialisation, infrastructure, agriculture, tourism and skills transfer, including ICT, and the building of resilient health systems in The Gambia.

Mr. Xu Liang, deputy director general of China Council for the Promotion of International Trade (CCPIT) in his remarks, noted that China is The Gambia's largest trading partner, while claiming that in 2020, the bilateral trade volume reached 566 million U.S. dollars. He indicated that the two countries have great potential for cooperation in the fields of infrastructure, construction, agriculture, fisheries, energy, tourism and trade.

CCPIT, he further added, will continue its commitment to deepen exchanges with The Gambia Embassy in China and counterpart agencies with a view to carrying out more pragmatic cooperation, building the bridges between enterprises of the two countries, industrial cooperation, and provide services to contribute to the economic and trade development of China and The Gambia.

During the event, Fatou Kinneh Jobe, deputy head of Mission of The Gambia Embassy in Beijing made a presentation on the Trade and Investment Opportunities in The Gambia.

In her presentation, she highlighted the Comparative Advantages in The Gambia, the priority sectors for investment such as Agriculture, Tourism, Energy, Manufacturing, and Health among others and further highlighted the opportunities of investment in each of these sectors.

She further highlighted on the investment incentives available for investors, the process of registering a business in The Gambia, the Investment Laws and Regulations and the Guarantees to Investors and Investments in The Gambia. 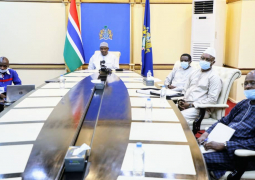