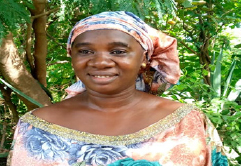 "It could be recalled in March 13th, we used to call it the Foni incident but it is no more called the Foni incident, because the spillover has affected most of the districts especially Kombo East and the Kiangs," she said.

"It is no surprise that ChildFund through their affiliated partner, Foni Ding Ding Federation, came up with a support of cash transfers to 20 families; they came up with another support to 160 families of their enrolled families and today we are witnessing the support of 300 families making a total of almost 500 families that are supported under these interventions, and the number of families registered from 13 March to date is 1,800 families," she added.

"Out of 1,800 families, government being the duty bearer, government was able to support 500 families. But through government's intervention and coordination, partners are coming on board and the support is going on smoothly."

"Yet, a detailed assessment was conducted just three weeks back. The detailed assessment clearly states that food security still remains a challenge for the coming three months, because we know that the rainy season is fast approaching. The Foni region is predominantly a farming region; they rely on agriculture."

"So, we don't know the predictions of the rain, whether it will be normal or not abnormal. That is not yet confirmed, but the prediction of the detailed assessment report indicates that food security is still a challenge.

She revealed in addition that the details of the Assessment Report confirms over 67% of all those internally displaced households are headed by females.

"Children forms 35% or 30% of IDPs who have crossed the borders and came within the Gambia. So this is a clear indication that there are families who were skipping their square meals."

She thanked the ChildFund and the Foni Ding Ding Federation and other partners for donation of food items, which, she believed, would help address the food insecurity and urged more partners to come onboard to intervene as well.

“I see my presence here as a home-coming albeit with a greater responsibility.

Cuban vaccine against lung cancer makes its way into the UAS

Havana, July 20 (Agencies) The Cuban therapeutic vaccine against lung cancer, Cimavax-EGF, the result of more than two decades of research, with satisfactory results in people with advanced stages of lung cancer, conquers the US scientific community and its population, based on the achievements shown in the studies carried out.