The European Union Election Observer Mission has highlighted one of its findings in its report that women participation in Gambian politics is very low. 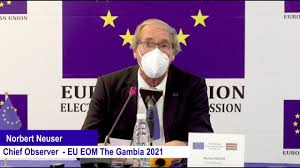 "Despite legislative efforts, women remain under represented in political life and affirmative action is needed to enhance their participation," the report states.

"The Gambia ratified the Protocol to the African Charter on Human and Peoples’ Rights on the Rights of Women in Africa that guarantees comprehensive rights to women, including taking part in the political process."

"It has also ratified the United Nations Convention on the Elimination of All Forms of Discrimination against Women (CEDAW)."

The report further added that: "The Constitution provides for gender equality through full participation of women in all spheres of society based on equal opportunities and non-discrimination.”

"In addition to the rights guaranteed under the Constitution, women’s rights are further protected under the Women’s Act enacted in 2010 to incorporate provisions of the CEDAW into national law, which provides for adoption of temporary special measures to accelerate meaningful gender equality."

"Women represent over half of the country’s population and almost 57 per cent of the electorate. Only 5 of the 58 members of the NA are women, and 3 of these were appointed directly by the president."

The report enumerated that on the cabinet level, of the 23 ministers, 4 are women, adding that none of the IEC members is a woman, and that all 18 registered political parties are led by men.

"Despite legislative efforts supporting the participation of women, political parties remain nevertheless overwhelmingly male dominated and have yet to address gender inequality by affirmative action gender policies within their parties, in terms of integrating women into party structures and selecting women as party candidates."

"Political parties should comply with the principle of gender equality and achieve fair gender representation in the nomination of women in party leadership positions and as candidates to help increase the level of women’s participation in political life."

"Amongst the 26 presidential aspirants, only 1 was a woman, and all 6 nominated presidential candidates were men."

"Although CSOs advocate for strengthening women’s rights, and reserved seats for women in the NA were foreseen in the Draft Constitution, no affirmative action has yet been adopted."

"The gap between the participation of women and men in political life can be attributed to traditional, patriarchal, cultural, and socio-economic barriers, among other things," the report concludes. 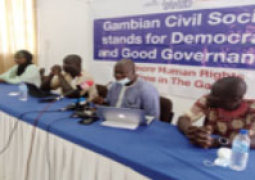 CSOs to march in  soliadarity with  Jammeh victims

John Charles Njie, the chairman of the Civil Society Organisations (CSOs), said the planned Saturday march past is to stand in solidarity with victims of the Yahya Jammeh government. 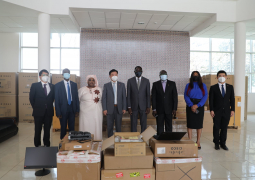 The chairman of the Independent Electoral Commission (IEC), Alieu Momarr Njai, is “fully alive” according to the electoral commission on Monday.