The accused: Godwin Ojukun and Frederick Felix Chainacherem are charged with two counts of criminal offences relating to their alleged involvement in the hacking of the Qpower account. They now face conspiracy to commit a felony and money laundering charges.

Chief Inspector E. Sarr for the Inspector General of Police said the two are currently apprehended in Guinea Bissau awaiting extradition. He explained that the Interpol office in Banjul had requested for their extradition, but their counterparts in Bissau are requesting for a bench warrant of arrest from a court of law.

Sarr, in making the application for the bench warrant of arrest against the two accused persons, pleaded with the court to grant the application in order to extradite the two.

The principal magistrate said she was satisfied with the application adding it had merit. : In this regard, she granted the application and issued a bench warrant of arrest against the two accused persons.

On the first count, they were charged with conspiracy to commit felony. According to the particulars of offence, the two accused persons, in the year 2021 in Banjul and diverse places in The Gambia, conspired between themselves and jointly hacked the National Water and Electricity Company (NAWEC) Qpower bank account number 003101010102011137 at Agib Bank, knowing same to be proceed of a crime, for the purpose of concealing the illicit origin of the funds to evade traces.

On the second and final count, the two were charged with money laundering contrary to section 22 (a) and (b) of the Anti-Money Laundering Act Combatting Terrorist Finance Act 2012. According to the particulars of the offence, the two accused persons, in the year 2021 in Banjul and diverse places in The Gambia, jointly hacked the NAWEC Qpower bank account at Agib Bank, knowing same to have been the proceed of a crime, for the purpose of concealing the illicit origin of the funds to evade traces.

The case was adjourned to the 26th April 2021 at 10 am for mention and for further hearing. Media reports suggested that the amount hacked is believed to be to a tune of eight million dalasis. 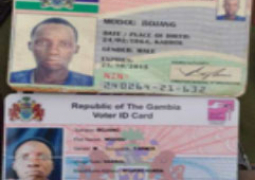 The Minister of Finance and Economic Affairs (MOFEA) Hon. Seedy Keita has told Gambia parliamentarians that in the context of improved domestic resources mobilisation, MOFEA has established a new Directorate of Tax and Revenue which will focus on enhanced compliance and monitoring of revenue performance.

The Gambia has confirmed four more cases of covid-19, bringing the country’s total number of infections to 41, health officials have announced yesterday.