Muhammed A. Jallow, Operations manager, AMM, Finance Services and Bureau De Change Ltd., narrated that he was robbed at Sukuta while trying to drop the money at his brother’s home by armed men dressed in all black with face masks.

He added that while he parked his car at his brother’s gate waiting to hand him the money he saw a vehicle speeding towards him. He added that he did not think they were armed robbers.

“I thought they had an emergency with the way they were driving,” he went on, saying when the men found him sitting in his car they ordered him to open the door.

He stated that he refused to open the door and the men fired two gun shots at the passenger’s side window and forcefully opened the door, hit him in the face with a big stick and went away with the money.

He said after the men hit him, he fell to the ground and cried for help but no one came to his rescue. He added that the police have promised to investigate the matter.

Mr. Jallow said the vehicle the armed robbers used was without a number plate but said he could identify the men if he sees them.

Momodou Lamin Sakho, the head of admin at AMM Finance Services and Bureau De Change Ltd., said he received a call from his CEO after midnight informing him about the incident.

He added that his CEO told him that in addition to the money, the armed robbers took three laptops.

The armed robbers he said, his CEO told him, spoke Wollof with Senegalese accent.

He described the armed robbery as well planned with Gambians a part of it.

The place the robbery took place is a one-way highway and they blocked the exit, he also said.

He noted that Gambia’s security needs to be tightened within financial institutions as well as secure way created for moving money. 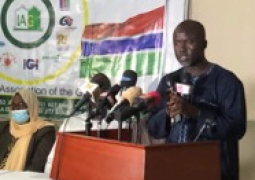