‘Africell makes biggest expansion in over 10 years despite Covid-19’

Africell claims it has made its biggest network footprint expansion in The Gambia in 15 years despite the pressures of the COVID-19 pandemic, according to Sam Williams, Group Communications Director for Africell. 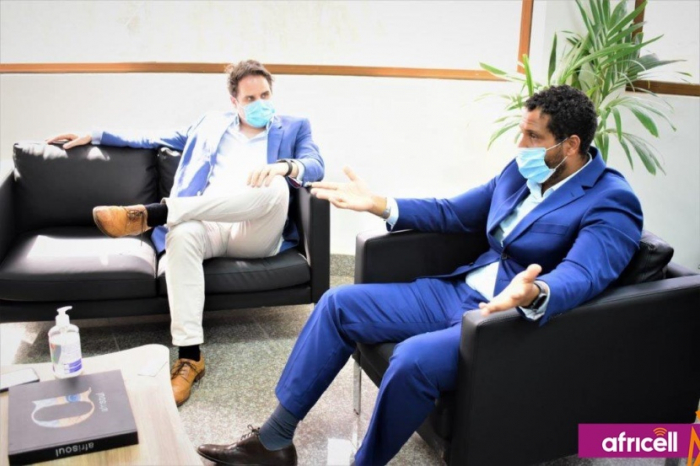 He added that the company was able to do this despite the fire outbreak that burned down one of its biggest warehouses. “Africell is going from strength to strength,” he stated.

He made these remarks on Monday at Africell head office on Kairaba Avenue, during an interview with Africell Group executives visiting from the company’s UK headquarters.

Mr. Williams added that in addition to providing physical products and communicating with customers through its brand, Africell represents fun and connected lifestyle.

Hussein Diab Ghanem, Chief Executive Officer (CEO) of Africell Gambia, said that Africell’s operations have a direct positive impact on local people, adding that as a Group they are committed to pushing the country’s economy forward.

“We are always ready to innovate,” he said, noting that Africell has a lot to offer Gambians and non-Gambians alike. Mr. Ghanem highlighted that they were also trying to be environmentally friendly while trying to allow everybody to be connected.

“As it stands, Africell has a 54 normal cell sites and 17 smart rural sites in the country. The smart rural sites use advanced solar-powered technology and give remote communities access to telecoms services without creating a negative environmental footprint.”

He said the reason Africell continuous to be the leading and biggest GSM Operator in The Gambia is because they listen to people and have a network of ambassadors in every community in the country, specially trained to tell the Africell story.

He revealed that Africell currently has over 1.6 million subscribers in The Gambia, attributing this to their secret of connecting with customers on the ground.

Ian Paterson, Global Chief Investment Officer for Africell Group, said Africell was founded in 2001 and launched its first commercial operations in The Gambia the same year. He added they are currently in four markets in Africa (The Gambia, Sierra Leone, DR Congo, and Uganda) with expansion into a fifth, Angola, scheduled for later this year.

The company has approximately 10,000 direct and outsourced employees, Mr. Paterson said adding that Africell is among the fastest growing mobile telecommunications companies in Africa. He added that they hope to bring big investors to The Gambia by providing an example of successful business operations in the country.

Mr. Paterson highlighted that Africell's strategy is only to move into markets in which it can "make a positive difference" in terms of reducing prices, covering more territory, and improving internet speed and reliability. This explains the decision to move into Angola in 2021.

“Africell has been the market leader in The Gambia since 2006 in terms of the number of subscribers, and it boasts 93% territorial coverage. Africell is well-respected in The Gambia as a mobile network provider, a significant private sector employer and a champion of local culture.”