The Ministry of Foreign Affairs, International Cooperation and Gambians Abroad through The Gambian mission in Brussels has successfully evacuated 32 Gambians from the conflict in Ukraine, according to a news release.

“Twenty-two (22) are in Poland, Eight (8) in Slovakia, 1 in Romania with his Ukrainian wife and child and 1 in Budapest, Hungary.”

“The Government of the Gambia through the Mission in Brussels has arranged for hotel lodgings in all the above listed countries for the evacuated Gambians and provided them with a means of subsistence. This offer has been accepted by the Gambians except a few who prefer to make private arrangements. This offer of assistance will nonetheless be placed at their disposal whenever requested.”

“The Ministry of Foreign Affairs further wishes to inform families of the evacuated Gambians and  the general public that the Government will facilitate the return of the evacuated Gambians back home. This information has been communicated to all concerned. However, the decision to return to The Gambia or make alternative arrangements is an individual prerogative which shall be respected by the Embassy and, the Ministry of Foreign Affairs. This offer shall only be provided to those who request for it.”

“The Ministry of Foreign Affairs, wishes to assure the public that the operation to effectively evacuate the rest of our citizens in Ukraine is still ongoing and the Embassy officials on the ground in the Polish Ukrainian border as well as in Brussels continue to communicate, guide and facilitate the movement and safe passage of Gambian citizens in Ukraine. This process will continue until the last known Gambian is evacuated.” 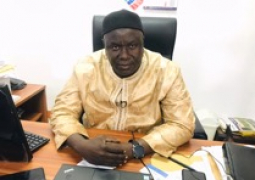 The National Disaster Management Agency (NDMA) Executive Director Sanna Dahaba, in an interview with this medium has revealed that over 13,184 people have been displaced since the Senegalese Forces launched attacks on the Movement of Democratic Forces of Casamance (MFDC).

The Gambia government has announced the relaxation of travel restrictions and plans to open some non-essential places, the Office of Government Spokesperson reveals.