The cheque was presented at a ceremony held at the Defence Headquarters in Banjul and the scheme was said to have been pioneered by President Yahya Jammeh.

Speaking at the presentation ceremony, Abdoulie Baks Touray, a board member of Zenith Bank The Gambia, spoke about the importance of the army in any nation.

It is the army that keeps us safe, and therefore they should be considered most in development, he remarked.

Mr Touray noted that Zenith Bank is a worldwide bank, and it is the biggest in Africa, adding that they see the gesture as part and parcel of their corporate social responsibility.

For his part, the managing director and CEO of Zenith Bank The Gambia, Emeka Anyaegbuna, told the beneficiaries that they are particularly proud of GAF.

He salutes the army and other security services for ensuring the maintenance of peace and stability in the country.

Lt. Connell Ma Bah, director of finance and budget at the Defence Headquarters, in his opening remarks, told the gathering that the day also marked a significant occasion in the history of GAF.

He described the gesture as very commendable while stating that the money would go a long way in helping the orphanage scheme. 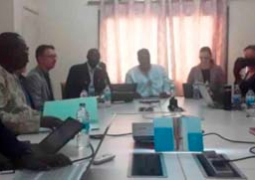