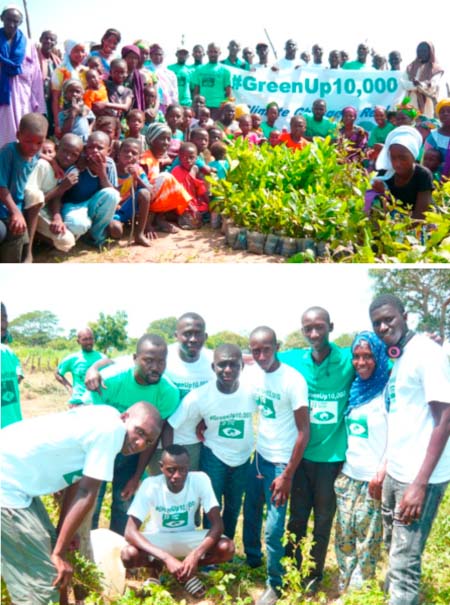 Green Up 10,000, a national youth-led tree planting initiative, has rolled out its first major campaign on Saturday 8 October 2016, with the planting of one thousand and hundred (1,100) trees in Medina Mennen village in the North Bank Region.

The tree-planting exercise came a few weeks after the colourful unveiling of a project that targets to plant 10,000 trees across The Gambia.

The Green Up project is co-implemented by Climate Watch-The Gambia (CWG) and Youth Action for Sustainable Development.

Launched by the Executive Director of the National Youth Council on 16 September 2016, in Kotu, the project was conceived by a group of thoughtful and environmentally-concerned youths, who have the foresight to address the adverse effects of climate change and environmental degradation, restore our forest cover and create a friendly environment for human existence.

Held on the theme: “Climate Change is real, Act now!”, the monumental event garnered the support and attracted the participation of members of the Village Development Committee, traditional and school authorities, youths and the womenfolk, in what become a remarkable cause as the villagers saw the need to mitigate climate change and related impacts on their environment.

A major highlight of the exercise and key component of the initiative is environmental and climate change awareness education, that was held before the tree-planting activity.

In this programme, villagers were enlightened about climate change issues, and the need to put their weight behind the project in ensuring a more sustainable environment.

The Alkalo of the village, Momodou Jallow, welcomed the Green Up officials, and said the village attaches a lot of significance to trees.

He thanked the team for choosing their settlement as a beneficiary, and called on Green Up and other stakeholders to help the village with more water supply, as the village is hindered by inadequate water supply.

Speaking at the event, Amadou Jallow, the chairman of Village Development Committee (VDC) and focal person of the Green Up initiative in Lower Niumi, hailed the efforts of the Green Up project for bringing the project to their village.

Jallow also commended the women of the village for their massive turnout and participation in the project.

He assured the Green Up team of his committee’s commitment to meeting the objectives of the project.

The project manager of Green Up 10,000, Kemo Fatty, said the project came up as a result of the need to address impacts of climate change on the livelihoods of the locals, as agriculture is the prevailing economic activity across the country.

“Since we don’t have much access to renewable energy and expensive irrigation mechanisms, we need to resort to simple actions like planting trees as we have a three-month-long rainfall season.

“Based on scientific reasoning, the rainfall pattern is expected to fall by 50% in 2020 and this is an alarming situation for us,” he added.

Fatty urged the youths to stand up and mitigate the impacts of climate change within their environments.

Fatty added that the Green Up project was launched in September 16, which coincided with the International Day for the Preservation of the Ozone Layer.

“These trees planted have numerous benefits to the environment and the community at large. The rainfall pattern has changed as we experience a shorter rainfall spell. The fishermen suffer as fish move to a cooler environment because of the heat - all these are effects and impacts of climate change,’’ he continued.

Fatty called on the villagers to take climate change seriously, as it threatens our existence as a people.

Jallow reiterated that the villagers appreciate and welcome the project.

Saikou Suwareh Jabai, executive director of Climate Watch-The Gambia (CWG) and Green Up coordinator, recalled that over the last few years, the forest cover and number of trees in The Gambia has significantly reduced.

This, he added, has resulted in loss of biodiversity and severe land degradation, due to soil erosion and loss of fertility.

He decried that our areas which used to be very fertile are now barren, and that the overall agricultural productivity has declined dramatically which is impeding our development as a country.

Jabai, who outlined the project’s objectives, urged the villagers to ensure the protection of the trees for a sustainable environment.

He commended the villagers for their hospitality, and said the project also marks the beginning of a relationship between the two parties.

Green Up Advocacy and Education Officer, Omar Malmo Sambou, said the importance of planting trees could not be overemphasized, as they help to protect the environment in many ways.

‘’They serve as medicines and carbon sinks, absorb the carbon dioxide during photosynthesis process,’’ he noted.

Malmo, who doubles as the programme manager of Climate Watch- The Gambia (CWG), stated that agricultural production in rain-fed nations is expected to fall by 50% in 2020 across developing countries, and The Gambia is not an exception to such,” he said, adding that activities like tree-planting engagements could help to better the situation.

He said there is a growing concern about the impacts of climate change, and this has brought about sea-level rise, salt water intrusion, cancers, and cataract, and that our foods and security as humans is under great threat. 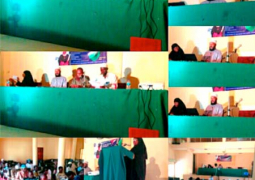