The Yoruba Community in The Gambia recently received The Gambia’s Paramount Chief Alh Demba Sanyang at their Palace Paradise in Farato.

Paramount Chief Sanyang, who was accompanied by a high-powered delegation from his office, was received by the HRH Palace Chief and executive members of the community led by their President.

As part of welcoming Paramount Chief Demba Sanyang, alligator pepper, honey, kola nut and other items were brought for prayers.

Elder Aderemi Afolabi, who was also among members of the community, thanked all those who accompanied Chief Demba Sanyang to this important Palace, saying there was no difference between the Nigerian culture and the Gambian culture.

In his welcoming remarks, King Abolade thanked Paramount Chief Demba Sanyang and his delegation for visiting the Palace, saying the visit was part of building the cultural and traditional values and linkage between the Yoruba community and The Gambia.

He told the gathering that The Gambia is blessed with peace and prayed for this peace to continue because it would bring progress to the country.

King Abolade also thanked the Gambian leader for his love for Africa and the world, as well as for promoting culture in Africa.

King Abolade, therefore, called on parents to teach their children norms and values inherited from their ancestors.

Paramount Chief Demba Sanyang thanked the King and the community members for the warm welcome and hospitality accorded him and his delegation.

He commended the Yoruba community in The Gambia as a true and hardworking community, urging them to continue the excellent job they are doing in the country.

Chief Sanyang told King Abolade that to be a leader is not something easy because it is a gift from the Almighty Allah, hence urged the King to continue his duties as expected of him.

The ceremony included Chief Alagie Alfusainey Jarju of Bintang Karani, Alkalo Fatou Sowe of Farato, President of the Yoruba Community in The Gambia Akeem Abudu, and Dr Emmanuel Bamgbelu, all of whom spoke well at the ceremony.

Paramount Demba Sanyang and his delegation were later decorated with beads by the King of the Palace. 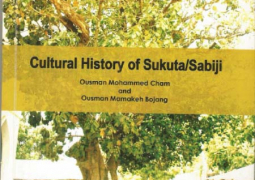