The National Council of The Gambia Young Men Christian Association (YMCAs) recently launched a skills training and enterprise development project for disadvantaged and marginalised young people in The Gambia.  The project is funded by the big lottery fund (BLF) and Y'care international, both based relief organisations.   According to the YMCA program secretary/BLF project coordinator Joseph Peacock, the program will last for four years; from 2008 until 2012.  "The project," he added, "is a nationwide project aimed at reducing the twin challenges of poverty and social exclusion among young people in The Gambia."  It is also geared towards reducing the unemployment rate among young people.  The skills training and enterprise development for marginalised and disadvantaged young people in The Gambia (STED) has a multi-faceted approach in developing the skills potential of young people in The Gambia.  Young people will be trained in viable skills of their choice and be exposed to advocacy skills using the "rights based approach to advocacy" while outstanding trainees/beneficiaries will be eligible to access the available revolving micro credit loans and input support from The Gambia YMCA's.  This will allow them to start their small-scale business enterprises at a very low interest rate.

In officially launching the project the Honourable Mass Axi Gai, Secretary of State for Youth and Sports, hailed The Gambia YMCAs for empowering the young people of The Gambia.   Secy Gai described the program as, "another milestone in the development of young people of The Gambia."  He acknowledged with appreciation the efforts made by The Gambia YMCA in contributing towards the socio-economic development of the country.  He went on to encourage YMCA's to collaborate with Gamjob for the effective implementation of the project.  He noted that the project will create self-employment for young people in the country.  He concluded his remarks by advising the beneficiaries to take the program seriously.

The ceremony, held at the YMCA head office, was chaired by Mr. Simon P. V. Cole and was attended by several dignitaries, YMCA staff and beneficiary youths. 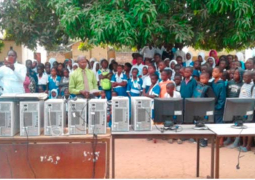