The Youth Care Foundation (YCF) The Gambia, with support from the Ministry of Basic and Secondary Education (MOBSE) Mathematics Association of the , last Friday organised an inter-schools mathematics competition among junior and senior secondary schools ahead of the Pan-African Mathematics Olympiad (PAMO) to be held in .

The competition brought together 34 junior and senior schools around the Greater Banjul Area.

According to the organizers, the objectives of the competition were to facilitate a healthy and academic contest among students in mathematics as well as to serve as a forum to discover the participants in the Pan-African Mathematics Olympiad in May 2012.

According to Kolapo Abdul, Director of YCF, this was not the first time his association has been organizing such a competition among schools.

“Designing inter-schools mathematics competitions is in YCF’s resolution of improving the quality of science and mathematics education,” he said.

In sequel of this, he said that introducing competition among students and schools will definitely bring the best out of them.

He noted that the vision of the programme is to support the outstanding students and to recognize the teachers and schools that inspire their excellence.

According to him, ten schools will be involved in the final stage on 10 February 2012, with five students from the senior secondary and the junior school categories.

“Four students will be finally selected to represent The Gambia at the Pan-African Mathematics Competition in May at ,” he added.

The YCF director revealed that the competition entails geometry, arithmetic, algebra, among other subjects, which will be based on general GABECE and WAEC syllabus.

He further adduced that prizes, such as gold cup award, silver award, and bronze award, will be given to winners from both categories in addition to cash award and mathematics material.

The final award presentation will be held on 24 February 2012 at the Seaview Garden Hotel in Kololi.

The YCF director said he is hopeful that the wholesome collaboration will serve as a platform in the efforts at promoting mathematics and science “in achieving a common goal”. 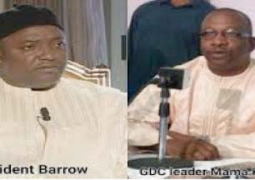