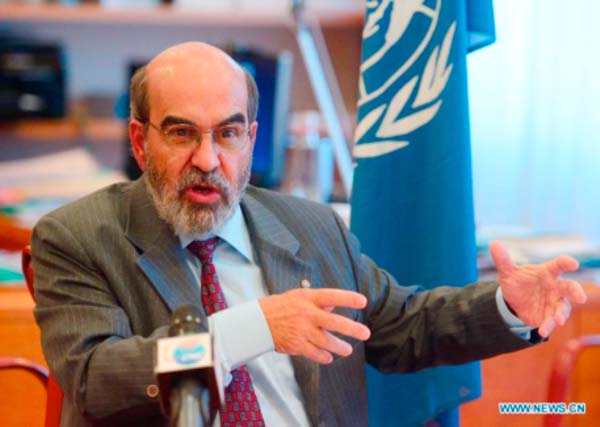 But gender inequality putting a brake on sustainable development

Achieving gender equality and empowering women is not only the right thing to do but is a critical ingredient in the fight against extreme poverty, hunger and malnutrition, FAO Director-General José Graziano da Silva said today.

Speaking at a high-level event co-organized by FAO, the European Commission and the Slovak Presidency of the Council of the European Union in collaboration with the International Fund for Agricultural Development (IFAD), the World Food Programme (WFP) and UN Women, the FAO-Director General said that “Women are the backbone of our work in agriculture,” noting that they comprise 45 percent of the agricultural labour force in developing countries, with that figure rising to 60 percent in parts of Africa and Asia.

These numbers underscore the importance of ensuring that rural women enjoy a level playing field, according to the FAO Director-General

“It’s all about opportunity. Evidence shows that when women have opportunities, the yields on their farms increase -- also their incomes. Natural resources are better managed. Nutrition is improved. And livelihoods are more secured,” he said.

This is why rural women are key players in the effort to achieve all of the Sustainable Development Goals - but especially SDG2, freeing the world from hunger and malnutrition - Graziano da Silva added.

Zero Hunger: No way to get it done without women

Neven Mimica, European Union Commissioner for International Cooperation and Development, told event participants: “It is often said that if you educate a woman, you educate a whole generation. The same is true when we empower women across the board -not only through access to knowledge, but also to resources, to equal opportunities, and by giving them a voice.”

Yet current statistics suggest that the world is falling short on this score, according to Mimica.

“We know that agricultural yields would rise by almost a third if women had the same access to resources as men. As a result, there would be up to 150 million fewer hungry people in the world. And we know that children have significantly better prospects for the future when their mothers are healthy, wealthy and educated. Especially during the first 1,000 days of a child’s life,” he said.

“If we are serious about putting an end to poverty and hunger once and for all, then we all need to step up our support for rural women. As an investment in families, in our communities, in our wider societies, and in our planet’s future,” the EU Commissioner argued.

In her remarks, Slovak Minister of Agriculture and Rural Development and current President of the Council of the European Union, Gabriela Matecná, said that “the gender gap imposes significant costs on society, in terms of lost agricultural output, food security and economic growth.”

However “when women are fully involved, the benefits can be seen immediately: families are healthier and better fed; their income, savings and investment go up. And what is true of families is also true of communities and, in the long run, of whole countries,” Matecná said.

Working together toward a common goal

Representatives of UN organizations also participated in today’s event, stressing the importance of stamping out gender inequality and empowering women with information, training, tenure, and fair access to resources and to agricultural, nutrition, and health support services.

“We see time and time again that gender equality opens doors for entire communities to strengthen their food and nutrition security and to improve their social and economic well-being,” he said, adding: “Empowering rural women is indeed empowering humanity.”

“It is only through empowering women farmers that we can unlock the power of global food systems. Supporting them is essential in creating resilience, building stronger businesses, and advancing food security in the long term,” Denise Brown, Director of Emergencies at WFP, told participants.

•           In developing countries in Africa and Asia and the Pacific, women typically work 12-13 hours more than men per week.

•           Across all regions women are less likely than men to own or control land, and their plots often are of poorer quality. Less than 20% of the world’s landholders are women.

•           If women farmers had the same access to resources as men, the number of hungry people in the world could be reduced by up to 150 million due to productivity gains.

•           Women reinvest up to 90% of their earnings back into their households - that’s money spent on nutrition, food, healthcare, school, and income-generating activities - helping to break the cycle of intergenerational poverty.