Magistrate Bojang of the Kanifing Magistrates’ Court recently convicted and sentenced one Adama Jones to a fine of D2,000 in default to serve one month in prison.

Ms Jones, who was convicted for assault causing bodily harm, was also ordered to pay a compensation of D3,000; failure to do so, the complainant could take a civil action against her.

In her mitigation plea, she told the court that it was not her intention and she had never committed such a crime before.

She asked the court to have mercy on her, as she is the first daughter of her parents and responsible for their welfare.

The charge sheet read that on 24 December 2014, at IC Bar and Restaurant in Manjai Kunda, she assaulted one Jatou Sowe by hitting her with a bottle all over her bodily, causing her actual bodily harm. 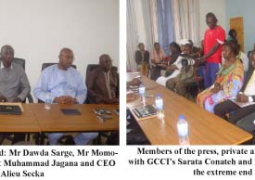