Both sides are hoping for a win to grab the vital three points to keep hopes of qualifying for the GFF third division triangular qualifiers next season.

Brufut United are expecting a positive result against Foni Kansala to increase their chances of sealing a place in the GFF third division triangular qualifiers next season.

Elsewhere, Black and White of Berending will host Gunjur United in the all-Kombo South derby game at the Berending Football Field.

Black and White will be hoping to bounce back following their 1-0 to Jambanjelly United in the West Coast Region third division qualifiers final game played at the Brikama Box Bar Mini Stadium last month.

Gunjur United, on the other hand, will also be looking to bounce back following their 8-7 marathon penalty shootout defeat to Brufut United in the opening game played at the Brikama Box Bar Mini Stadium on Friday.

On Sunday 9 March 2014, Nema United will battle it out with Farato United at the Farato Football Field.

Nema United, who were demoted to the third tier in 2010 will be looking for a win against Farato United to keep their hopes of regaining promotion to the second division.

Jambanjelly United will be hoping to bounce back after their 2-0 defeat to Lamin United in the GFF third division triangular qualifiers last month. 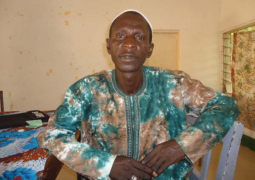