Our congratulations to the new ministers, who have been recently elevated to the various positions. The three ministries namely, Finance, Justice, Trade and Employment are critical ministries in the country.

The new ministers should put at the back of their minds that their work is challenging, and thus requires hard work and dedication.

We, however, have a piece of advice for all the three ministers.

First, we urge the new Minister for Justice to use his wealth of experience to consider the plight of all detainees in our various prisons, including Mile II, Janjanbureh and Jeshwang.

Those who have a case to answer should be brought before a competent court within 72 hours as stipulated in the constitution, while those whom the state does not have sufficient evidence to prove its case should be released.

The new Justice Minister should also work towards repealing all draconian press laws to create an enabling environment for the journalists and all media workers in the country to operate in.

Such a move would enable the media fulfil its mandate effectively and efficiently, thus contributing meaningfully to national development.

For the new Minister of Finance, we know he can as well deliver, considering his wealth of experience in the field.

We hope he would work tirelessly to put the national economy on a more sound footing.

To the Trade and Employment Minister, we urge him to summon a stakeholders meeting to address all the trade and employment challengesfacing the country.

The outcome of such a meeting should be tangible recommendations to make goods and services accessible and affordable to all Gambians, and boost employment opportunities, especially for women and youths.

Noting that trade and employment are closely linked to the success of the private sector, which is described as ?the engine of growth?, a conducive environment must be created for them to thrive.

The free movement of goods and services in the sub-region as advocated by ECOWAS should also be a top priority. We also need to be very aggressive in promoting our re-export trade since it is one of our major foreign exchange earners.

Once again, we congratulate all the new ministers for joining the Cabinet.

"No personal consideration should stand in the way of performing a public duty." 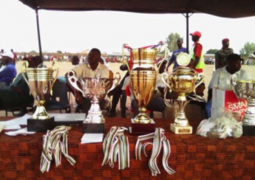