Teams can either complete their registration list if it is not exhausted or withdraw players from the list, or register new players who have not played for another team in or other Zones.

The fee for the extra registration of each player is D25.

Also, if any registered player(s) during the first round has not played any match that player(s) can automatically transfer to another team.

Hopefully, Warrios, and Late Kebba Demba can learn from Elminite, Jamesen, Plumbi United and Macdonald United to get their act together to bounce back and rejoin the football family in 2012.

REPORTING ON TIME FOR MATCHES AND BALLOTING

We have now reached the knock-out stages of matches and their will be prospect for penalty kicks. All teams are being informed again that they should report for matches on time, so that matches can commence on time to avoid delay.

If teams are responsible for the delay of matches, the playing time will be reduced to ensure it does not affect the second match or for darkness to affect the match. We are urging all teams to report on time and cut the unnecessary time wasting before and at half time.

Final balloting of the quarterfinals of the Sky High Group knock-out finals will be on Saturday, 19 October 2011 at 5.00pm.

All teams’ representatives concerned should attend. 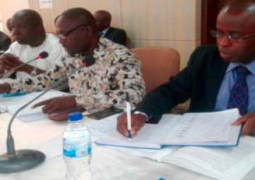