Road accidents have been a major killer in this country. Though we do not have the statistics at hand, media reports testify to the fact that many lives have been lost through road accidents. The causes of these accidents are many and varied. Over-speeding, negligence due to faulty brakes or worn-out tyres or lack of headlights (especially at night) has often been pinpointed as the cause of road accidents in our country. Poor roads, with crater-like potholes or narrow slippery bends, are also at the root of most accidents.

An accident is an accident because it is not planned or intended, but its resultant harm could be mitigated through caution and forethought. One such measure is the use of the seat belt, or safety belt as is sometimes called. We think safety belt is more appropriate because it conveys more explicitly the purpose it is meant to serve. The great merit of the safety belt is that gives the passenger stability when an accident happens. As a result, he or she suffers less harm than they would have suffered without fastening their safety belt.

When some time last year the idea of the safety belt was mooted, it was greeted with skepticism. Most people were of the belief that it was unenforceable. But the police stood their ground, with the Inspector General himself appearing on national television to warn that any violator of the safety belt law would be dealt with sternly and right on the spot.

Since then, drivers themselves have taken it upon themselves to remind passengers to always fasten the safety belt. There are three issues at play here. One, it is ironic that people have to be forced to safeguard their own lives. Two, it tells us that any rule or law is enforceable provided there is the will to enforce. Three, it has disabused our minds of the misconception that Africans cannot be made to keep basic laws.

In furthering the enforcement of the safety belt law, Africell as usual has done its own bit by giving out stickers to drivers. These stickers are often seen stuck on the compartment right in front of the passenger seat. This is a commendable effort, which should be emulated by other corporate bodies. 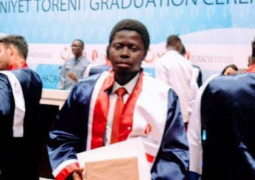