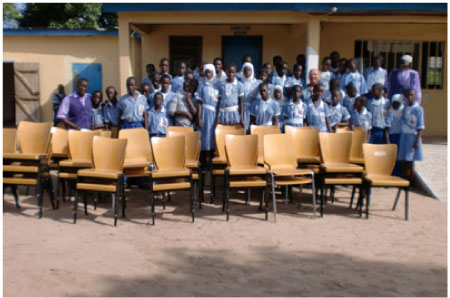 Wansee Nursery and Lower Basic School in Sukuta in the Kombo North district of the West Coast Region, recently received a donation of chairs, tables and movable boards from their principal donor, Abdul Aziz, a German national.

Abdul Aziz said at the recent presentation ceremony that he feels delighted in sponsoring the school.

He noted that during his first visit to the school sometime ago, he was motivated to intervene and support the pupils there. He said during the visit he found the pupils sitting on the floor, while they were learning.

He expressed hope that the materials donated would help the pupils of the school learn in a conducive environment, and will improve their standard of education.

He also used the opportunity to appeal to other donors and philanthropist to come forward and help the school in any way they could.

The founder headmaster of the school, Sambou Kanteh, thanked Mr Aziz for his magnanimous gesture.

He said that the support being rendered to the school is very timely, and he would help the school attain excellence.

Mr Kanteh added that they are struggling to have their own upper basic school, but the only constraint they are facing is a land problem.

He said their intention is to recruit their students from nursery stage through lower basic all the way to upper basic school level.

Mr Kanteh finally urged the parents to regularly pay their children school fees, because the school is depending entirely on the fees to run it affairs.

The school head boy urged his fellow students to be regular and punctual at school, and to make their books their friends.

Wallidan to clash with Gamtel in GFA premier tier today