A journey by land through the five Books of Moses

MANY pilgrims to the are shocked by the vulgarity and commercialisation at holy sites associated with Biblical events and the life of our Lord. But if they begin to pray. they feel God's presence.

The American writer of this book, Bruce Feiler, visited parts of the Middle East associated with the first five books of the Bible: what the Jews call the Torah or the Books of Moses, and we call the Pentateuch.

It was for Feiler a literary quest, at least initially, and not a spiritual one. 'Keep it real,' he told himself. 'Keep it concrete. This is about me and the Bible, It is not about me and God.'

But Feiler felt that the Bible is more than the recounting of Middle-Eastern traditions: it is alive today in places we can visit. So he made a 10,000 mile journey, or series of journeys. His companion was an Israeli archaeologist. Avner Goren, a man alert, sensitive, humorous and open-minded. Goren pointed out that large parts of the Bible consist of oral traditions that were passed on for hundreds of years only written down a millennium or more later.

The two men went to the junction of the two rivers, the Tigris and the Euphrates, where the Garden of Eden is thought to have been. Feller declares: 'Though we are only in the second chapter [of Genesis], and clearly in the realm of allegory, the Bible is rooting itself firmly in the ground in actual places, in geography. The stories seem to be reaching out, saying: These are not tales - this is not recreation - these words are as indispensable to you as the landscape, the soil, even in the water itself; stories, like rivers, give life.'

The imagery of water

So much of the imagery of the Torah - indeed, of the whole Bible, of the words of Christ himself derives from water: floods, streams and rivers. Feller examines many traditions concerning a great flood. He visits Mount Ararat, where Noah's ark came to rest.

'Beyond its literary roots, the story of Noah begins another, more fascinating side of exploring the Bible today:

namely, the race to prove that it happened. Some explorers believe have they found the 'true' Garden of Eden. but even the most credulous Bible enthusiasts believe those efforts are probably fantastical. With Noah though, and the introduction of' historical details, these efforts begin to gain credibility. They reach the point of hysteria with attempts to authenticate later passages like the ten plagues, the splitting of the Red Sea, and Moses receiving the Ten Commandments on Mount Sinai. Almost every day of our journey we would encounter another of these enthusiasts, and in time I came to marvel that in addition to creating communities of believers, the Bible had created equally passionate communities devoted to the arcane, quasi- scientific analysis. Feiler blends questions, historical reminiscence and speculation with his own, matter-of-fact narrative about his journey. For example:

We piled back into the jeep and turned north. Before reaching the eastern perimeter of the Delta and the likely site of the biblical Red Sea, we hoped to see the ancient garrison towns of Pithom and Rameses, which Exodus says the Israelites built for the Pharaoh during their bondage. To do that, we needed to leave the main road and navigate a series of dirt roads to Sa el-Hagar, one of several candidates for the city of .

Almost immediately we got lost. If' no tourists go to Zagazig, no people at all go to Sa el-Hagar. Any hint of' development quickly disappeared and we were in a borderless never-never land of cabbage carts and rice paddies, wooden wheelbarrows and cattails the region seemed more overgrown than Eastern Turkey, but less developed. The tallest objects were palm trees, silhouetted against the haze, which had now replaced the fog.

We stopped for directions then stopped again. We stopped a third time, and a fourth asking questions.

In their arduous but engrossing quest Goren and Feiler ask many questions of each other, and of others, and get some answers.

In this book are fascinating references to the Egyptians, the Israelites, Moabites, the Ammonites, the Persians and many peoples, modern or ancient, who are just names to us. If we, like Bruce Feiler, seek connections between the world of Moses and our own, we want to join him in his quest. At the end, says Feiler, Moses died in the wilderness. He stood on (as Feiler so many years later did) and looked towards the Promised Land. But it's been calculated that no-one could see , the or the from . 'Moses wasn't seeing as we do. In the end, he wasn't even looking at the land. He was looking where we should look. He was looking at God.

'When the apricots are ripe'

Is this the best place to end this review, or is there space for another quote?

As we were lounging in the faint shade of one of the tamarisks, a Bedouin man in a flowing cotton labourer's gown came strolling over to our carpet. Asner [Gorenj leapt up and embraced the man fiercely, kissing him three times on alternate cheeks and holding his hands, Khaled had worked with Avner when he lived in the Sinai, and they hadn't seen each other for a number of years.

Khaled was in his forties, but looked twenty years older. He had a white khaftiyeh round his head and a prominent white tooth. Despite the heat, he wore black leans under his robes and a grey sweat-shirt that said. 'Winner Casual Wear'.

Eventually Goren asked him what time of the year the manna appears.

'Only when the apricots are ripe.' he said, 'In June'

'Like small cotton-balls,' he said. 'In the morning they're liquid, but as the sun comes out they become fluffy, like fur. By noon-time, they're dead, they just disappear, melt.'

'So how do you collect them?'

He reached down and grabbed some small pieces of granite and a handful of sand. 'The manna covers the ground in early morning,' he said. 'You pick it up, then let the wind blow away the dirt.' He opened his fingers to let the wind blow the sand away, leaving only the rocks. 'The wind sorts it out,' he said.

'It's very sweet, sweeter than honey.' he said. 'There's even a special blessing, since it's mentioned in the Bible and in the Qur'an.'

'And do you feel connected to those ancient people when you eat it'?'

He squirmed momentarily, as if trying to find the right emotion. 'It's spiritual to eat it,' he said. 'It's not like bread or meat. It's a kind of surprise. Some years you have it, some years you don't It's a blessing.'

Walking the Bible: A journey by land through the five Books of Moses. By Bruce Feller 442 pages with maps and index. 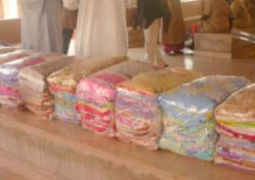 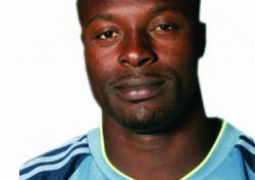