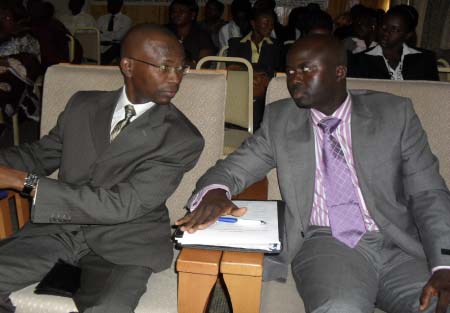 WAICA Re, a new sub-regional reinsurance corporation, established by the West African Insurance Companies Association (WAICA), has created opportunity for investors to benefit from its dividends.

Shares of WAICA Reinsurance Corporation (WAICA Re) are up for sale at one dollar per share, the sub-regional reinsurance company says.

A delegation of WAICA Re was recently in The Gambia,  as part of the ‘equity road show’ of the institution to its member countries, to have meetings with potential investors,  including individuals, companies and governments, to raise the initial capital of an institution conceptualised thirty years ago by the founding fathers of WAICA.

During the meeting with insurance officials on Thursday at the Kairaba Beach Hotel, the chief executive officer of WAICA Re, Abiola Ekundayo, said the reinsurance corporation will provide the much-needed reinsurance capacity for the sub-region.

Mr Ekundayo said the objective of the ‘equity road show’ was to raise the initial capital to kick-start the operation of the corporation.  “Our authorised capital is US$100 million but we need to have US$25 million to start operations as according to the law of Sierra Leone, where the head office is located, you must pay 25% of the authorised capital before you start operations; that is why we are embarking on this activity to raise funds from individuals, institutions as well as governments of member countries of WAICA.”

The shares of the association are up for sale until 29 July 2011, he said. It is expected that within this period the association will be able to raise the initial amount needed to commence operations.

WAICA Re, recently launched by the President of Sierra Leone, Ernest Bai Koroma, is out to fill the gap of reinsurance in so that reasonable proportions of reinsurance premiums that have been flying out of the sub-region to reinsurance companies in the West will be retained for investment.  The corporation will provide its clients with comprehensive insurance, reinsurance, financial and business services of the highest quality and value.

The future is bright for WAICA Re as the development of the oil and gas sectors in and provides tremendous growth opportunities, he disclosed.

For his part, William B. Coker, secretary general of WAICA, formed by the five English-speaking countries of West Africa in 1973, said the sub-regional reinsurance company is enjoying diplomatic status in , where it is hosted.  “Enjoying diplomatic status means WAICA Re is not going to pay tax and you all know if an institution doesn’t pay tax it has higher profit and it’s from this profit that dividends of shareholders are paid,” he said.

Dawda Sarge, president of the Insurance Association of The Gambia (IAG), who is also the managing director of Prime Insurance Company Limited, called on insurance practitioners and other potential investors to respond appropriately, by buying the shares of WAICA Re, to make the venture a successful one.  “Our commitment must be backed with some action to make it move,” he said.

Senor Thomas, managing director of International Insurance Company Gambia Ltd, also urged her colleagues to support WAICA Re, saying “it is our own organization” as it’s a worthwhile venture.  “Honestly I think we need to support the institution as we are all going to benefit from it,” said Madam Thomas, who is a member of the ten-member board of WAICA Re.

Pa Alieu Sillah, Commissioner of Insurance at the Central Bank of The Gambia, said WAICA Re has come at a very opportune time, when the sub-region is working towards closer economic integration.  “It is also an opportunity for the sub-region to prove that we believe in insurance because it is through that the insurance industry will develop,” he said.

Babou Cisse, a doyen of insurance and one of the founding fathers of WAICA who initiated the formation of WAICA Re thirty years ago, thanked the current WAICA executive for having made the dream of him and his colleagues come to pass.

He also emphasised the importance of reinsurance in the sub-region, calling on all and sundry to throw their weight behind the insurance industry in .